Good morning from a wet and blustery Foxford. Lock down or not time seems to be flying. Already approaching the Middle of March when between now and St.Patrick’s day traditionally we would see the first salmon in the Foxford area taken.  With conditions as they are this is doubtful this year.  Over the past few days we have had a lot of rain and the river is now at 1.6m at Ballylahan bridge. From now on the run of fish should increase and as conditions improve and restrictions are eased fishing will improve.

I had an hour on the Moy in Foxford on Sunday evening last. It was a nice evening and even though the water is very high I decided to try the fly rod.  I was using a very fast sinking line and a 1 inch brass tube fly. To my surprise after less the twenty minutes the rod doubled and I was in a fish. Yes as you have already guessed it wasn’t the fresh run springer I was hoping for but a Kelt. I didn’t mess about, got it to the bank quickly and without taking it from the water unhooked it and let it on its way. It was a nice well mended Kelt with plenty of life and it swam away pretty lively. It would be interesting to know how many Kelts actually make it back to the ocean. Judging from the amount of them we are seeing in Foxford I would say quite a few.

Reports from Ballina were a little different where Darren Cawley Landed a beautiful fish from Ballina salmon Anglers waters. This is the third fish taken there so far this season. Well done Darren.

Where to find a springer on the Moy system

Although there are a few parts of the lower and middle Moy that produce good numbers of spring fish the best of the early season fishing always seems to be from Foxford upstream. Threes a few theories for this but my own thoughts are that as the flow of water from the Loughs is normally big in the spring the fish keep moving fast until they get into the lighter flow upstream of the joining on the Clooongee fishery. If we were to look at catch records, the two fisheries upstream of the joining, Cloongee and East Mayo Anglers would certainly show up as the Spring hot spots.  The Gub, Howleys , Ryans, The Long Bank, Coolraw, The Joinings,  Caaraigeen are all areas worth trying. Pontoon Bridge and the Ballyvary river are also noted Spring fishing areas. 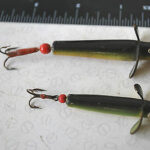 As I have said in the past, the successful angler is the angler who is prepared and ready to adapt to conditions. This is no different when searching for a springer. In high, coloured water worm and spin are going to be the best methods. As levels fall and the water clears Fly fishing will come into its own. The main thing to remember is that slow and low is the key to success, you must get the bait to the fish. Search as much water for a fish, don’t stand in one spot waiting for the fish to come to you. Heavier spoons and spinners and larger flies. On the Moy I would not be without a few Flying Cs in the 16 to 22gram range, Silver blades work very well and Black, red and yellow tails seem to be the most effective. Copper and Silver spoons, Tobys, Rapalas and the traditional Blue and Silver or Yellow Belly Devon minnows are also well worth a try. For flies I would always have some combination of Blue, silver, Yellow and Black in sizes 8 or 10, (Lemon Shrimp, Hairy may, Beltra badger, Calvin shrimp, Cascade, Magenta shrimp) a half inch or 1 inch brass tube or cone head is well worth a try.

Its something that we as anglers are all very aware of, we are only custodians and must try to hand on our sport to future generations. Hopefully we will hand it on in a better place than where it was when we took it on. Springers are quality fish and a prized trophy. There will be a few days in spring where everything falls into place and fishing is fantastic. These are the days we need to show restraint.  Sensible bag limits of 1 per day and no more than 3 in total during the spring months are law on the Moy. On that red letter day when you do manage to hook more than one, do the decent thing and return the second one unharmed. I’m not a catch and release preacher and I will kill a few salmon throughout the season and yes in the past I have killed more than one Springer in a day. All I can say is that I will do my best in the future. I will try to do something to help stocks. 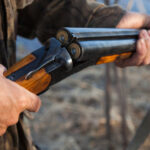 On many occasions I have watched Cormorants feeding on salmon smolts and prayed that they would choke, on occasion it appears to have worked, I have seen a few dead cormorants float down stream. I would encourage you to do the same.