Good morning from a dry and cool Foxford. Not much news on the fishing front. The weather last weekend was bad and we did not manage to get out. Hopefully this weekend we will get out for a few hours. We have been working with our rod manufacturer on a couple of new fly rods, the prototypes of which we have now taken delivery of. I’m looking  forward to putting  them through their paces before we launch them early in the new year. We also have plans to take on a “big name’ brand and are in “negotiations” with the supplier. All going well this will happen before Christmas. For today we have a few Black Friday offers on the website, you might find something and a 10% bonus on Gift vouchers makes them a good investment TODAY , It’s back to normal tomorrow.https://themoy.com/product/gift-voucher/ 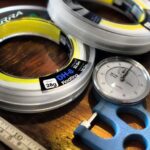 Let’s look at the important stuff

The main difference between a Salmon line and trout line is the weight and profile of the line. Salmon lines are designed to load larger Double hand rods and cast heavier flies and leaders.  Like the trout lines we looked at last week Salmon lines have advanced a lot in recent years. Traditional weight forward and Double tapers have largely been replace by Integrated Spey lines, switch lines and Shooting heads.

Spey lines are similar to normal weight forward lines with the characteristics of a shooting head i.e. a heavy front end followed by a level running line. The integrated part just means that the line is continuous with no joint between the head and running line. In comparison to the older styles of line they have a lot going for them. They are available in different weights and head lengths to suit different rods and casting styles. They have precise tapers and are normally colour coded to show the optimum loading point. For example a line may have three colours, a green head, a white running line and a bright orange section between the head and running line which marks the loading point. Generally when this orange section is at or just passes the tip eye the line should shoot well. Most Spey lines are marked using grain weight which is very accurate and useful when matching them with modern rods. 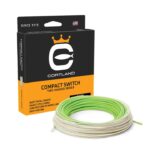 Switch lines are designed to be used with the increasingly popular Switch rod which I would describe as an” in between “rod. Not a single hand and not a long heavy double hand rod. Normally Switch rods are in or around 11 foot (3.3m) and have casting weighs of #6t to #9. On the Moy they have become very popular as summer or Grilse rods and are a lot easier to fish with than the traditional double hand salmon rod.  Switch lines are designed with specific head lengths and tapers to load the rod perfectly. It is well worth investing in a proper switch line rather than trying to work the rod with a traditional WF or DT. 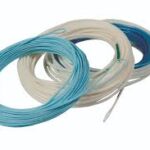 The shooting head is as the name suggests a head that is connected via a loop to loop connection to a level running line. Shooting heads can be used on single or double hand rods and are very versatile. Often referred to as shooting head systems which is a combination of running line, head and tip. Anglers will normally have a few heads in different densities which can be quickly and easily changed thus allowing them adapt to conditions. The same running line is used so the angler only needs to carry the heads separately.  Heads fit easily in the pocket and do away with the need for having separate spare spools with varying densities. The preferred system to match shooting heads with various rods is using grain weight. You may have to experiment a little to find the ideal weight and length for your rod and casting style but it is worth the effort. Some Line manufacturers like Rio have good guides for matching various rods and lines on their websites

Otherwise known as shooting lines, running lines are a level line attached to the backing line at one end and the head at the other end. Running lines come in various breaking strains and are made from a variety of materials. Most modern running lines shoot well and without kinking and tangles. Pick a recognized brand like Cortland, Rio ,Airflo or Scierra and you can’t go far wrong.

T-tips and polyleaders are accessories that can be added to either normal lines or shooting heads. The main reason for using these is to aid presentation. They are available in a range of lengths and densities from floating to Ultra fast sinking.  T-tips are level tungsten tips that sink fast. They are used to get the fly down fast, primarily in fast flowing water or when the water is cold. Poly leaders are more popular and are used throughout the season. Polyleaders come in a variety of lengths and densities but 5 foot and 10 foot are the most popular. It is useful to carry a range of these and similar to shooting heads they are not bulky and can be easily stored.

That’s not too difficult to understand but it’s enough for anyone to know to get started. I hope you found it somewhat useful. Tight lines if you manage to get out for a cast, I’m planning !