Good morning from a damp Foxford. the forecast for the weekend is pretty good so we re looking forward to a few dry days. We went Pike fishing on Monday but it was virtually impossible, strong wind and driving rain. I don’t really need to say it but we caught nothing!. I hope you are getting out or at least thinking about fishing. I received a gift of an old Mepps brochure in the post, some interesting stuff in it and plenty to keep an angler content on a wet night during lockdown, “little amuses the innocent”

This weeks blog touches on the subject of Fly lines and the AFTMA scale. I hope you get something from it.

To say that Fly lines have evolved and advanced over the decades is a true statement. To say that a huge amount of this has happened in the past decade is equally true. Even for those of us who are involved in the tackle trade it takes keeping with. For someone wishing to take up the sport it’s a mine field and mistakes can be costly. To pay anything between forty and a hundred euro on a fly line and then discover it’s not what you actually thought it was is an expensive lesson. Yes, your local tackle dealer can and should be able to advise but as I said if they are not on the ball and keeping an eye on what’s happening they may not be up to speed. For example, if you asked a tackle dealer who retired 10 years ago what a “WF7 DI3 Sweep line” is, he or she may look blankly at you.

The first real development in the Fly fishing industry was the standardisation of equipment. There was a time when different companies produced rods, reel and lines none of which were standard. A line made by one company may or may not suit a rod made by another company. There was a huge amount of guess work. Some clever people (The American Fishing Tackle Manufacturers Association)   got together and devised a scale, the AFTM scale.

A basic understanding of this scale is all we as anglers need. Fly lines are weighed and rated with #1 to #15, these lines are matched with rods and reels. The suitability of a line for a particular rod is judged by the ability of the line to load the rod with the first 30 foot of line Is in the air  i.e when casting and 30 foot of line has passed through the tip eye, the rod should be loaded and ready to shoot line. So if for example a rod is found to load best at this 30 foot point using a #7 line, the rod is rated #7. A reel of suitable size and capable of holding a #7 line and an appropriate amount of backing was also rated #7. The rod was then marked AFTM #7 and the #7 line and #7 reels should be just about right. The system was never totally exact but we still use it today and in general it is good.

Modern materials used in rod manufacturing have brought about faster action rods and a lot of these rods need to be evaluated differently than older models. While we can still apply the same AFTMA scale it is slightly more accurate to measure rods by grain weight. You will notice that a lot of modern double hand Salmon rods are marked using both systems. It is never going to be an exact science and I would personally never get too hung up on it. It is good enough to know that AFTMA stands fro American Fishing Tackle Manufacturers Association and that a #7 line should be about right for a #7 rod, #8 for an 8 weight rod and so on. The profile/taper and density of the line is a far more important factor, especially when it comes to catching fish. 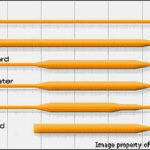 The profile of the line is basically the shape of the line, the way it is tapered. Let’s look first at typical line profiles for single hand rods, your basic trout rod.  There’s two main tapers, DT which stands for Double taper i.e. the line is thickest at the center and tapers to a point on both ends

WF which stands for Weight Forward i.e. the line has a thicker front end and a level running line at the rear end.

Double tapers give us a more delicate presentation of the fly and are used a lot in dry fly fishing while weight forward lines tend to be less delicate on landing and are more suited to wet fly. The WF comes into its own when distance and resistance to wind are called for. Here in Ireland most Lough anglers would tend to favour WF lines while small Stream anglers would go for DT.

There are other profiles which are specialist e.g  a level line used for nymphing. Not something we would use every day so again not something to get hung up on 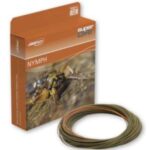 The next very important thing we have is Density. Fly lines are made in a variety of densities that will either float, hover below the surface or sink at various rates depending on the line. This is denoted by a letter used in the code printed on the fly line box or sometimes on the line itself, after the weight. F for floating, H for hover, I for Intermediate and S for sink. Generally on the sinking lines there will be further information as to the rate of, usually DI3 DI5 or DI7. If you have a line and are uncertain what it is, in general the darker the colour of the coating the faster the sink rate (Light green=floating,Brown=fast sink). As is the case with profiles/tapers there are some specialist densities, sink tips, ghost tips (a transparent sink tip) and buzzer tapers. All these lines would have the main part of the line floating with just the tip sections sinking at various rates depending on the line. Sweep lines allow a u-shaped retrieve path by having the sinking speed of the belly faster than that of the tip and running line. Due to the way this u shape draws the fly through the water column sweep lines are useful for searching for fish feeding at various levels. 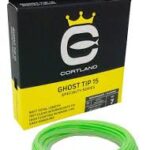 Floating Line: By far the most popular fly line is the floating line and it is most fly anglers standard line. Certainly for anyone starting to fly fish I would recommend a floating line. Floating lines are easy to cast and useful in many situations. As we get more accomplished at casting and fly fishing in general it is a good idea to experiment with other densities.

Sinking Lines: Will as the name suggests sink. Something to have in the arsenal for the tough day, cold water, bright sunshine and when fish are playing hard to get. They are not for everyone and are pretty hard to fish with especially the faster sinking ones. They come in a range of sink rates. In general a DI3 will sink at approx 3 inches per second, DI5 at 5 inches per second and DI7 at 7 inches per second.

Looking after your Fly line 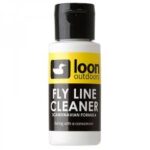 Fly lines if cared for will last a long time and an angler can expect to get several seasons out of a line. Damage is usually caused by accident or abuse, its amazing how many lines get caught in outboard propellers!

The plastic coating of all fly lines is easily cracked and damaged. A beginner is well advised to start with an inexpensive line as they will be getting caught up in bushes and other bank side vegetation on a regular basis.

Avoid exposure to strong sunlight or other heat sources.

In the closed season Store lines in large hanks.