A beautiful mild morning in Foxford and the eve of a new season on the Moy. On paper at least, in reality it will be the middle of March before it really kicks off. It is nice to see the evenings starting to lengthen and now we will have the opportunity to go for a cast. A nice time of year to nip out for a quick hour to hone our skills for the sport that will come later. It’s my personal belief that the season opens to early and it would be better leave it until March to open and perhaps extend the season into October. Runs appear to be getting later and spawning is taking place later. Just last Monday P.J and I visited the source of the Moy. A short distance from the source we spotted two Salmon that appeared to be still spawning. Maybe they had finished but were certainly going through the motions; we did not want to disturb them so moved on. As I said that’s My belief, I certainly would like to see some of the more intelligent well paid people do some studies and see if what I am saying is correct, Anyway…..

For anyone that is going to “Wet a line” tomorrow, Good Luck. Water levels will be slightly high (1.15m at Ballylahan bridge now) but it will be fishable. Please remember there will be lots of Kelts heading downstream. Try to give them a chance. For anyone new to Spring fishing i’m going to attach a little piece I done last year regarding the differences between Fresh run Springers and Kelts. It’s no harm to have a quick read of it and if you like please share it.

Kelts/Slats: Are salmon which have spawned and are making their way back to the ocean. If this Journey is successful the Kelt which is worn out and emaciated after several hard months in fresh water can once again feed, regain strength and condition and perhaps make a second return to its river, only this time as a Larger Salmon. Identified by the thin shape, distended vent and presence of “gill maggots” on the gill filaments, Kelts are frequently encountered by anglers in spring when they regain a silvery appearance and can be mistaken for fresh run Springers. On the Moy it is not uncommon to hook a Kelt as late as the end of April. It’s easy to get excited when we catch a Salmon but let’s not get too excited before we first determine that it is a fresh run Springer. By Law Kelts must be returned unharmed to the water. 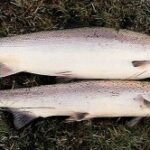 Fresh-Run Salmon: Recognised by the pristine condition, bright silver flanks and thick girth. A Salmon straight from the Ocean will have loose, easily detached scales and many carry sea lice which drop off within a few days. Spring Salmon rarely “show” themselves, on most occasions they make a boil in the water without jumping. Kelts on the other hand jump frequently and Tail walk across the surface. During the Spring period if you see a fish jumping several times or splashing on the surface its most likely a Kelt, move on and leave it alone. When hooked a Spring Salmon Fights hard, will make several runs and will stay deep in the water. A kelt may attempt to fight but after a few minutes and a couple of half-hearted runs will come to the surface.

Normally thin with a flat belly

Fins and tail are ragged

Gills are pale colour with maggots 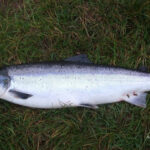 May have sea Lice attached

Above information with Help from Tiernan Brothers Foxford