Good morning from a cold Foxford. Not icy or anything near it but certainly a damp cold wintry feel has set in. Not much angling going on but I got a good report from a gentleman who is having some nice shore fishing at the moment. He is catching good sized pollock and a few other species. He even managed to catch a Lobster; it had taken his bait which is something I never heard of before. The undersized Lobster was released unharmed.

I mentioned last week that I would do a little piece on some popular Fly patterns for the Moy. I will do this each week for the next few weeks and by then You should have a good idea of what patterns are essential for a trip to the Moy. If you don’t tie flies, don’t panic. We have a good selection of these available during the season. The first pattern is the Foxford Shrimp, not that is any more important than the others, they all have their moments. I just thought it would be a nice one to start with. I will also continue with the Fisheres on the Moy

Foxford Shrimp: As the name implies this pattern has its origins around Foxford. I can’t say for certain but I’m pretty sure it comes from the early to mid-eighties, the era when Mrs. Aldridge from Mount Falcon Hotel controlled the fishing on what is now the Foxford fishery. Guests from the hotel accompanied by their Ghillies would come up to Foxford to fish on a daily basis. Mrs Aldridge had a few very experienced Ghillies who were themselves good anglers and fly tyers. The stretch of water which at that time was known as Bakers waters was not ideal for conventional fly fishing. Some of the younger and more adventurous Ghillies started trying different methods including the Bubble and Fly. A very popular method for trout fishing the bubble and fly had not caught on as an effective salmon method. They found that it worked well for salmon, especially in summer when the water levels were low. Around this time there was a lot of experimentation with different fly patterns, styles and sizes. I don’t know who exactly “invented “the Foxford Shrimp. Personally I believe that like a lot of other patterns it evolved over a period of time as the result of trial, success and collaboration between anglers and Gillies/Fly tyers. The name Foxford Shrimp would suggest that it worked well in Foxford. We all have our own memories of this period and I’m sure there’s a man out there now saying it was me, it’s my Invention. However, or whoever came up with the final pattern, it’s a good one.

As has been proven many times it does not only work in Foxford. A very effective pattern for bubble and fly it also works well on the fly rod and a favourite of many of the locals. It seems to work best from about May onward and is especially effective in the later part of the season August/September. It will take both fresh and resident fish and is best fished in sizes 10 to 14. Size 14 can be deadly in low water conditions

Fisheries on the Moy Part 2

Immediately downstream from Bakers fishery there is a short stretch of water which flows through the town of Foxford and past the woolen mills. Like all parts of the Moy, this stretch has its moments and can fish very well during the summer months. In general, the fishing is kept for the locals and we do not sell permit for this part.

The next fishery we encounter is the Foxford fishery. Staring just upstream of Maloneys Lodge, the fishery is managed by Granville Nesbitt and offers private salmon fishing for a maximum of 9 rods along on a 2.5 KM double bank section and a further 12 rods along 1.5 km of single bank. The fishery ends at the start of the Rinnanney fishery on the right bank and Gannons fishery on the left bank.

The Foxford fishery fishes well from March onward and all methods can be used. There are a few very good pools on the fishery including the Nibb which is a well-known spring pool and a place where some of the larger salmon tend to lie, The Poplins, which is one of the better fly pools on the fishery, Gurteen and the Frenchman’s. With two fishing huts, proper styles and well-kept banks The Foxford Fishery is one of the more attractive fisheries on the River Moy. The fishery also offers a Ghillie service. Booking is through Granville Nesbitt on +353 (0)86 803 2350.

Adjoining the Gannons fishery on the left bank is the Armstrong’s fishery. Operated by the Armstrong family this is a 1.5km stretch of primarily deep channel. Suitable for spin and bait, good numbers of salmon are taken here annually. For anyone looking for an easily accessible fishery for spin and bait fishing, Armstrong’s is a good choice. The Armstrong family are friendly and accommodating and always do their best for anglers visiting the fishery

The next fishery downstream of Armstrong’s on the left bank is called “Byrnes”. The fishery is now under the management of Niall Byrne and booking is through Roy Buckley or John Mc Dermot. Approx. 1.5km of channel with depths varying from 1m to 6m. Byrnes is another fishery that at first looks featureless but in fact has a lot of hidden detail. The yellow river pool been one of the better pools especially after a summer flood. Booking through John Mc Dermot on 0876543136 or Roy Buckley on 0876447850

On the right-hand bank immediately below the Foxford fishery single bank we have “Rinnanney”. The Rinnanney fishery is the second fishery controlled by Foxford Salmon Anglers. Circa 4.5km in length ending at the confluence of the Moy and Yellow Rivers it consists of primarily deep channel which at a first glance can appear featureless and daunting. However as one gains more knowledge of this piece of water there’s quite a lot going on, submerged boulders, deep channels, sand and gravel banks all create good lies for fish. During the summer months a lot of fish will lie in the deeper pools. Due to the overall depth of the water, steep banks and slow flow this part of the river is not ideal for conventional Fly fishing, however bubble and fly can be very productive. Combined with the clubs other fishery “Bakers” it’s a real value for money offering. Four car parks within easy walking distance of the river and an anglers shelter. All legal methods are permitted. Permits are available from our shop

Downstream of these fisheries the fishing is again divided. On the left bank immediately downstream of Byrnes fishery we have Knockmore Salmon angler’s association waters and on the Right bank from the yellow river we have Attymass anglers. Both clubs share approx. 2 km of water which are divided between upper and lower, with the Coolcronan fishery in the middle. The upper part of both fisheries sharing four named pool, the most famous of which is the Wood pool. The lower parts a further three named pools the best known been Paddens. This part of the river tends to fish better during the summer months and Paddens is well known as a very good pool in the autumn. Spin, worm and prawn are the favored methods but in low water conditions the bubble and fly accounts for good numbers of fish. Both associations have water keepers who sell permits on the bank, permits are also available from some houses close to the river. 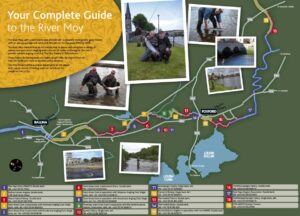 The Coolcronan Salmon Fishery offer fishing on Approx 1.5km double bank. Rods are limited and must be booked through the Fishery manager. Over the past number of years, a lot of work has been done on the fishery to improve access and generally enhance the angling experience. The fishery offers a Ghillie and boat service. With twelve named Pools Coolcronan fishes well throughout the summer months. All legal methods are permitted and all take fish at various stages. Booking through the fishery manager Nick Cousins on 083 8344114.