OUTLOOK: Bitterly cold both by day and night. Treacherous conditions with some severe frosts, icy stretches and dense freezing fog in parts too. Some hail, sleet or snow showers, but a good deal of dry weather overall.

Well, that’s directly from the Met Eireann website, doesn’t look great. I was chatting with a man on Wednesday who told me he plans to fly fish for Pike on a local lough at the weekend. That’s numb fingers waiting to happen, just saying! Overall, the weather is not bad and we had a few very nice days during the week. The water levels are falling and the river is now at 0.75m at Ballylaahan bridge. With this cold weather it will continue to fall, not that it really matters from a salmon angling point of view but if levels are low around Christmas its nice to get out for a wander and check out a few streams to see how spawning is going.

I mentioned last week that we are now getting stock in for the coming season and that we got some Leatherman tools. The first time I saw a Leatherman was about thirty years ago. I was guiding for a group of anglers who were also into motor bikes. They all wore Leatherman tools on their belts and during the course of three or four days I saw them in use many times. As a guide one sees lots of gadgets and very often that’s all they are is gadgets, fancy products that are not fit for purpose. At that stage I had never seen a Leatherman and didn’t know what they were. I was intrigued, I suppose as much by the fact that they all had one as much as by the tool itself. In the end curiosity got the better of me and I asked for a look at one. As I asked for a look at it, I called it a pliers and the guy who I asked said with a laugh “No man it’s a Leatherman, not just a pliers”. He could have got a job as the Leatherman marketing manager. “This is a serious tool” “All the guys in the club have one on their belt when they ride” “We fix motorbikes with them” “Serious tools man, not cheap shit” and in fairness it looked and felt it all. To cut a long story short, their last day was a Sunday. They had to leave for Dublin airport at midday so I said id take them out early in the morning. We fished for the morning and I don’t remember catching any fish but it was a beautiful morning and we all enjoyed it.  Before they departed and as we were breaking down the gear, they made a little presentation to me. Four of them gathered around me and after a ritual that involved a shot of whiskey a shake hands and a bear hug from each of them, I was handed a little leather pouch with Leatherman etched into it. I have been given a few tips in my time but this one was special. There was a certain feeling attached to this tool and I knew it was going to be a useful friend. 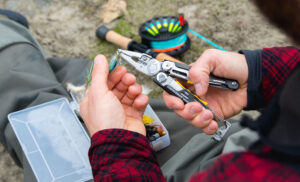 I put that tool on my belt and with the exception of one year, there it sat for over twenty years. The one year it wasn’t there was when my toddler son removed it and hid it. It just disappeared and I had a feeling he had taken it. Several times I asked him “Where is daddys Leatherman” to which I got a blank look until one day a year later I asked again, out of the blue he giggled and ran out of the house looking at me as if to say chase me. He ran into our neighbours lawn and there beside a bush was my Leatherman. It was out of the leather pouch and lying half open on the ground. I picked it up and examined it, the only damage was the button fastener on the leather pouch had rusted. I was absolutely amazed. A drop of oil and a rub of sandpaper on the rusty button and I was back in business. 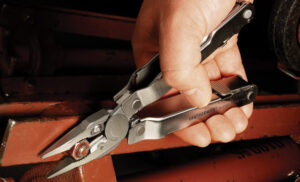 Its not until you have one that you realise just how handy the Leatherman tool is. It has bailed me out of several situations including the windscreen wipers on the car stopping working, outboard motor issues, fixing reels, DIY jobs, the list is endless. I don’t have a motor bike but I even carry it on the bicycle. The nice thing about is that it folds down and fits in the pouch nicely, you can wear it on a belt without knowing it’s there and when you do need it, there it is. 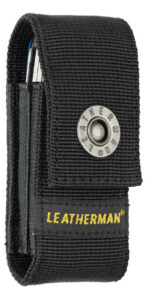 The first Leatherman I had was a pretty basic model, it had a knife, file, three screwdrivers, a scissors, pliers and wire cutters. I ended up breaking it one day while loosening a nut. I had a clever idea to hold the nut tight with the pliers and hit the Leatherman with a hammer. Yes, hindsight is great. The range today is amazing and I would safely say there’s one to suit every application. Like everything else there’s a price range and the more you pay the more you get. I still don’t have that top of the range but I’m happy with the one I have.

Why not treat a friend to one for Christmas, a good excuse for a shot of whiskey and a bear hug.

Check them out here, still in time to order 🙂 https://themoy.com/?s=leatherman&post_types=product