Good morning from a dark and cloudy Foxford. It looks like we are going to have some wet and windy weather for the weekend. I have a feeling it will interfere with a fishing plan, the joys of winter fishing in the west of Ireland. This week we will take a look at getting the fish from the water and onto the bank, just a few little things that might be worth thinking about. Im putting a link at the bottom, this is a link to a consultation IFI are having regarding the future of the Licence/Tag system in Ireland. As distributors we will be making a submission. I would like to hear some of your ideas as to how the scheme might work better. If you have any ideas please send them in the comments.

Netting or landing a fish

Possibly one of the most important things to plan and be ready for is often forgotten about until the critical situation arises, then in a panic it can easily go very wrong. I suppose it’s something to do with not wanting to be overconfident but we have a tendency to Not think about how we will get the fish from the water and to safety on the bank. I’m sure you have stood on the riverbank and either watched someone make a total mess out of landing a fish or like myself have done it yourself and here I confess I have F….d it up on more than one occasion. Over the years I’ve seen and been part of some funny incidents while landing fish.

One example: P.J ad I often fish together and we will normally net each other’s fish. We had a funny (looking back on it) situation in August while P.J was playing a little salmon. I had the net ready and was in Position. I was using my phone to video the netting of the salmon which I figured would be nice for the winter blog. The fish headed downstream and P.J followed it, I went to follow him and in doing so stepped across the edge of the bank and threw my phone in the river. As I said looking back its funny and I’ve smiled about it a few times since. https://www.facebook.com/michael.tiernan.5/videos/1690596064468854

Here’s a few things to think about

Plan ahead: Whether it’s a prize fish you want to have mounted and proudly display, a fish for a special dinner with family or a specimen Pike you want to return un harmed, you need a plan on how to get the fish from the water to the bank and a little bit of skill to execute the said plan. Providing you not going to release the fish and are in a position to use a forceps and perform a quick release in the water you will need to get the fish out of the water and to safety on the bank. Here we have a few options.

Location/positioning: It will not always be possible and there will be times when you hook a fish in a very difficult spot (stuck between two trees or with overhanging branches, just upstream of a weir I could give several examples) but before you hook the fish it’s a good idea to have an idea of the best place to land it. It’s not rocket science, have a look around you and choose what you think is a pretty accessible spot where you can get close to the water and is clear of obstructions. If you have a landing net leave it ready at this spot, preferably downstream of where you start fishing. 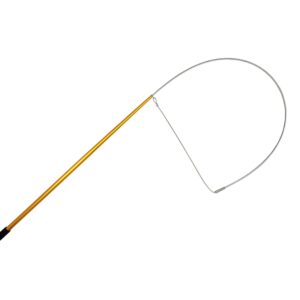 Ways to land a fish

Tail the fish: Probably my second choice and one id use if my preferred option was not possible. Tailing a fish is as the name suggests catching it at the tail and lifting it from the water. When I was younger it was a popular method and along with using our hand there were a few pretty neat home-made tailing devices. These were copies of factory-made devices, the factory-made ones had a handle, attached to this was a tapered springy steel wire with a ring at the end. This ring was used to form a loop which locked open. The loop was slid over the tail of the fish and was released via a button on the handle. A combination of the spring action and a quick upward snatch by the operator usually saw the fish swinging onto the bank. Our home-made models normally consisted of a fox snare and a handle made from a stick, not as subtle as the Shop bought ones but at times they worked. On other occasions they failed miserably, mostly due operator error and looking back I’m also smiling at some of those errors.

Tailing a fish by hand is a reasonably good method. Firstly, a larger fish is easier to tail than a smaller one and trout or sea trout are very difficult to tail. The reason for this is that a salmon has a knuckle at the tail which gives something to grip, that larger the tail the more there is to grip. The sea trout does not have this knuckle and there’s nothing to grip, it will just slip from your hands once you try to lift it from the water.Make sure the fish is well played out and lying on its side on the surface. Choose and area that you can get close enough to the fish to actually reach it. No point hanging by your toes on a steep bank, that’s just not going to end well.

Don’t mess about: When you touch the fish, it’s going to try and get away. Use your dominant hand and make a decisive move. Put your hand around the tail just above the knuckle grip and lift. At this point the fish will normally be subdued but you need to be aware of two things. (1)  The shock of been lifted from the water is going to quickly wear of and the fish is going to start thrashing about and (2) Your grip is not all you believe it to be, the fish will be out of your hand and heading for the river. Once you lift the fish get it to a safe point well away from the river.

Beaching: This is another possibility which at times works well and at other times ends up in a mess. The secret is in the location, a nice shingle bank that’s level with the water is ideal. Once the fish is played out and coming to the surface pull it gently but steadily toward the bank and up onto the gravel. Again, be careful once the pressure is released, the hook very often falls out and if the fish starts hoping about it can easily end up back in the water. Something to note is that there’s a difference between beaching a fish and using the rod to lift a fish out of the water the latter is a disaster waiting to happen. If the bank is not level with the water don’t attempt to beach the fish.

The Landing net: My favourite method. The Landing net is one of those awkward Pieces of equipment that we all hate the job of carrying, however when it is needed, we all look for one. How many times have you been fishing without a net and hooked a salmon? What’s the first thing you’ve done, yes you looked upstream and downstream to see if anyone close by had one.

Netting a fish properly is an operation that needs perfect timing and coordination. A few things that are important: (1) it’s a good idea to have your net left ready at your chosen landing spot. I normally try to pick a spot downstream of where I start fishing and if I’m lucky enough to hook a fish I can easily make my way down as I play the fish. A Salmon will normally head down stream with the current especially as it gets tired.

(2) Don’t rush, you have worked hard to hook the fish so now enjoy the moment. Play the fish and do not try getting it in the net immediately. Rushing with the net and trying to get the fish into the net before its ready usually ends up with the fish getting off the hook.

(3) Assuming you have either reached your net or taken it from your back and got it ready for use, lay the net down beside you where you can easily pick it up when needed.

(4) When the fish is played out and on its side on the surface, lower the net into the water. Slide the fish over the net and once it’s in position simply lift the net and pull it toward you, twist your wrist to point the end of the handle skywards. In doing so the fish falls into the bag of the net and is securely held while the weight of the fish is pulling downwards, thus not been supported by the extended shaft. Do not lift the net up in the air, it’s not a frying pan and you are not tossing pancakes. Lifting a landing net from the water with a fish in it (frying pan style) will bend the shaft of the net and if it is a cheap net will most likely break it.

(5) It’s one thing if you are netting your own fish, your left hand knows what your right hand is doing and you are in control of the situation. Once it becomes a two-man operation communication is very necessary. The angler needs to bring the fish withing reach of the net and the netsman needs to know the correct moment to net the fish. I would say the most important thing for both parties to remember is not to rush the job. The angler screaming net him when the fish is in the middle of the river and the netsman stabbing wildly and blindly at a fish running past him is a fight waiting to start. Very amusing to watch though…..

Have a good week folks, see you next Friday