Good morning from a dry and beautiful morning in Foxford. Welcome to the first Friday blog .It’s a strange feeling when the season ends and we move onto the winter opening schedule. It’s a nice to get a weekend of but it doesn’t come without a certain feeling of guilt and takes a bit of getting used of.  We had plans to go fishing last weekend but the weather was just to nasty. It rained very heavily on Sunday and by Monday morning the river was in the first of the winter floods. After bringing home the boat from Lough Conn We took a spin to a tributary of the Moy where good numbers of fish were moving (one trying to run up a rock in the video), a good sign for the spawning season ahead. I’ve had a few suggestions for topics in the blog over the coming weeks, including “more about fly patterns” “winter fishing” “Novice section” “Putting prawns on single hooks” “Fish takes” “ Lough trout fishing”  all will be covered between now and the start of the 2021 salmon season.

Time to put the salmon gear away, tidy the tackle bag and prepare for next season. Well that’s what I said to myself the other night and my intentions were good. I headed up into the attic and made a start. The start was the tackle bag. I opened it up and the first box I pulled out was my “favourite” box of baits. That box that all salmon anglers have stashed away somewhere. The box that contains those “special” baits. The baits that “always work” “You can’t go wrong with”………… and are now impossible to get. So impossible to get that we are afraid to fish with them, just in case we lose one. You know the box I’m talking about, you have one as well. It most likely contains a selection of Copper and silver Spoons, Devon Minnows of which the wooden ones are cracked and the metal ones no longer have paint left on them, a few Tobys (#the sweedishones ), a battered Mepps No.4, perhaps a Rapala, something strange like a Woblex that you found 40 years ago and kept “just in case”, a few scraps of lead and a rusty swivel. You just nodded in agreement, I knew you have one, we all do.

Mines an old tobacco tin of which the original owner has succumbed to inevitable effects of the original contents. The box has survived and I have had it for many years. My son Mike often laughs as he relives his youth telling me tales of the days when he took it fishing without realising the “value” of the baits and lost several. This makes me wonder exactly what I had or what did he loose.

I know for a fact that at some stage  I’m going to remember because every bait that ended up in that box did so for a reason. Each bait has a story behind it; the baits themselves are triggers to the memory. I struggle trying to recall a lot of things and on many occasions have stood in the supermarket and wondered what I came in for but every bait I take from that box is for me like opening a diary. I can see the Fish whether caught, lost or not hooked at all, the riverbank and the people I fished with. I can remember the conditions and the reason for choosing the bait.

For example, there is a stucki tuna in the box. A copper and silver spoon about 2 inches long with a half scale pattern. I caught my fourth salmon on this bait, a grilse of about 5lb . It was on a morning in June and I went fishing early. My intention was to sneak into the club waters and have a few casts before anyone else was around. I didn’t have permission or wasn’t allowed to go there but I’d be in and out and no one would ever know. As I headed for the club waters I could see there was a guy there already. A Belgian gentleman who regularly visited Foxford and was friendly with Tom Coleman, one of the older and better anglers in the town. Tom was also a well respected official in the Angling club! The Belgian and I had both chosen to try the exact same spot however he was busy setting up his gear of which he appeared to have lots. I was in a hurry; apart from the fact that I was breaking the rules, I had to get to school. Not that I thought that was important but it had to be done.

My rod was ready, set up the night before. The standard 18lb Maxima Line that was going to pull in any bush I hooked and certainly had the capability of straightening any hook Mustad ever made, on the end of it my Stucki. The normal and most popular spoon at this time of year was the Swinford spoon but I had chosen the Stucki as I had been told by one of the other Village elders that the Stucki was a great bait for a grilse and I had seen a few grilse the evening before. I quickly slipped into the spot before my Belgian counterpart. There was a good breeze blowing and a nice ripple on the water, ideal conditions for spinning. After no more than a few minutes a grilse broke the surface a few yards from the bank, I cast slightly upstream of it and started to retrieve. Whether or not it was the same fish I will never know but my rod doubled and I was in. The Belgian been a gentleman used his net to land the fish for me, he didn’t say a lot. I made good my escape and got through the day in school. Later that evening I was back in my usual spot at the back of our house, where we now have the shop. Tom  Coleman and the Belgian were upstream of me in the club waters, I can still hear Tom calling down to me as he walked home from the club waters “Mikeen ya better go home to bed soon if you want to be out early in the morning”. Not to long after he told me not to be afraid of him and fish the club waters whenever I want.  A happy memory.

I always say there’s more to fishing than catching fish. I didn’t get to far with the tackle tidying and I still have several baits in that box. If I start running short of blog material You will be hearing about them. Pull out a few of your old baits and see what memories they spark  and it’s a nice way to make a start on the annual Tidy up, “there’s more to a bait than the metal it’s made from”. 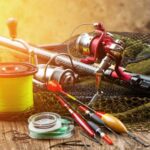 Remove all line and dispose of it properly, its always better to start the season with new line.

Clean the reel. If it has been used in salt water rinse it of and shake it dry. Leave the reel somewhere warm like a hot press for a few days then re oil and grease it. If this is a job you’re not comfortable doing drop it into your local tackle shop or we will happily do it for you.

Once it has been serviced wrap it in a clean cloth and store it for the winter.

Remove the fly line and backing line. When doing this it is best to use a line winder or you will end up sorting a big mess!

Clean the reel and oil and grease it.

Although fly reels look pretty simple, it is best to let someone who is familiar with them do any servicing. The drag system can be complex and if adjusted incorrectly can cause problems.

Remove from reels and spare spools.

Use a clean cloth, gentle detergent and lukewarm water to clean.

Check the loops and the lines in general for signs of damage.

Most important: Label each line clearly with as much detail as possible. This will make life easier at the start of the new season.

I’m hoping to get out fishing tomorrow, more about that next Friday.

Another dry but dull morning in Foxford. The river is now at 0.23m at Ballylahan bridge. Its low but fish are taking and there seems

A still dull morning in Foxford, not a ripple on the water. Another difficult angling day ahead, we need rain. For anyone on holidays or

A dry bright morning in Foxford, not ideal for angling. It looks like a tough day ahead although we are forecast some cloud in the