Another wet and windy morning in Foxford. Water levels are very very high and the river is unfishable. Its looking like there will be no fishing for a good while. On a positive note there’s an odd fish showing up around the country so when levels do fall we should be in action. On a day like this its difficult to imagine low water and fly fishing but it will come and i’m sure we will be looking for rain by July. For anyone thinking about patterns to tie or have prepared this little piece may be of some use. 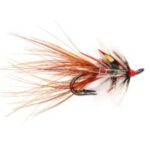 Many books have been written on the subject of fly tying and fly patterns. Shops including our own are seriously overstocked with hundreds of different patterns all of which were “killers” at one stage. It’s not that these older patterns will not work; they are just out of fashion or in a lot of cases have evolved into something new and slightly different. If we take it over a period of time, that’s not surprising. People see flies and try to copy them, they often substitute a material or colour for another material or colour and the original has already changed. What has really made a big difference in the past 20 years is the availability of materials. Synthetics have replaced a lot of traditional fur and feather (Bring back seals fur 🙂 ) and there’s an amazing range of “sparkle” available. This creative process of designing or adapting patterns has led to the availability of hundreds of new looking flies. Often When I look through old boxes of flies I fined patterns that I have forgotten about or can hardly recognize. I bet that in your fly box or stuck in a hat somewhere you have a G.P or an Orange Allys shrimp. These patterns will still take fish but when did you last try them?

Every day we get asked what the best fly is for today. It’s a question that is not easily answered. Like in a lot of angling situations, a lot has to be taken into consideration. If we were to get into it here it would be far too much for a short blog. For now we have picked a selection of twelve “go to” patterns. I’m confident to say that any angler fishing the Moy who has these twelve patterns in his or her box will cover most situations throughout the season. https://themoy.com/product/salmon-flies/