Good morning from a cold and wet Foxford, pretty nasty out there. Still no sign of the first Salmon of the season but that’s not surprising because there has been very little angling activity. The weather this week has gone from frost to rain and wind back to frost and now cold rain, not exactly what we want for an enjoyable days fishing. I mentioned last week that I was going to try out a new fishing reel.

When you have been winding fishing reels for over 40 years and have seen probably every one of them that has been made its hard to imagine that anyone can produce a “New” spinning reel. Well, they have and credit where its due the Savage Gear range is nice 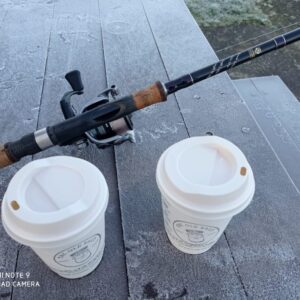 Going back to one day pre-Covid times I was in the shop chatting with David Cambridge our Svendsen sports sales rep. We got to chatting about tackle and the difficulties with selling it. I asked him the question I ask all sales reps from various companies, is there “anything new coming out”. I could tell immediately I had hit on something, he looked at me with a little smile as if to say do you know something. You know the look when you accidentally ask someone an innocent question and they suddenly look guilty, you have hit on something they are keeping a secret. David had obviously been sworn to secrecy and his reply was a very excited Yes there’s something big happening but I can’t say anything yet. I wasn’t going to put him in an awkward position so I didn’t push for more news. I just said something on the lines of make sure I’m one of the first to know.

I would have to admit that I did spend a fair bit of the day wondering what it could be. My initial thoughts were that they were working on a new lure. Svendsen have several brands but one of the better and most innovative is the “Savage Gear” brand. You may already know it, especially if you are a Pike or salt water angler. They produce the Line thru lures, seekers, sand eels and lots of other sea trout and bass baits. Of course, I didn’t guess right and I wasn’t going to find out until David came back with more news.

Covid came along and we all got caught up in that and the problems it created. Thinking about what’s new was not really an issue’ it was more a case of Survival and Staying in the game. So, when David finally told me that they were bringing out a complete new rang of reels I was not over enthusiastic. My first question was who’s making them for you. A huge number of reels on the market are mass produced with various badges put on them. This results in a lot of cases are the same old rubbish in different boxes as opposed to new products. Davids reply was that Svendsen have worked on this project for over two years and have designed and developed a complete new range of their own reels. In fact, they are so confident in these reels that they will offer a five-year warranty. This was interesting, I had a good feeling that we were going to see some good products. Earlier this year I ordered some of the reels and we took delivery a couple of weeks ago.

There’s four fresh water models and two salt water models along with some space age looking bait casters in the new range. The obvious difference is in price and like most of these things the more you pay the more you get in the form of features and quality of components. Although I’d say the Bass lads will be very interested in the saltwater models, the fresh water models are what are really of interest to most of us. Four sizes 1000, 2500, 3000 and 4000 and four models SG2, SG4, SG6, SG8

For many years I have said that Foxford should be the testing ground for fishing tackle. I don’t think there is a better environment with more suitable candidates to test any product. I know that once I sell a rod, reel or any other item to one of my local customers it is about to be put through its paces and if it fails, I will soon know all about it. So, no better place to give the reel a try.

Sunday morning and it’s a frosty start. As mentioned there’s four different models in a variety of sizes SG2, SG4, SG6 and SG8 . The SG2 been the least expensive and the SG8 the top of the range. Ive chosen the SG4 to try, my reason for this is that I don’t expect the least expensive model to be fully up to the “Foxford test” and it would not be fair to dismiss the reels on the grounds of it failing and if the SG4 can Pass then I will have no problem recommending the SG6 and SG8 both of which have more features and better-quality components.

Ive decided to spool the reel with a line from the Savage gear stable as well. The line is called Silencer. What attracted me to it was the diameter to breaking strain ratio, 0.31mm with a breaking strain of 7.17 Kg (15.88Lbs) is pretty impressive. The colour is also good, it’s a pinkie grey colour and I have a feeling it will become on of the more popular bubble and fly lines. The line is spooled on a very handy plastic holder that can be placed on the fishing rod for twist free spooling (see the short video clip) https://www.youtube.com/watch?v=03vskhrS-i8. I spooled straight from the box and the line lay was perfect. However, included in the box are spare washers that can be added to fine tune the line lay.

The reels come nicely packaged in a cardboard box with all the necessary paperwork including details on how to care for them along with the five-year warranty. The reels which have Graphite or Carbon composite bodies, look good and feel light, solid and smooth. When spooled with the 150m spool of Silencer mono the reel was full with about 10 meters left over. This is ample for Salmon fishing. If using braid, it would have taken a lot more.

One of the reasons that Foxford is the ideal testing ground for tackle is that the river here is pretty wide with a strong flow and lots of rocks. We tend to do a lot of fishing with Flying Cs, great baits but they destroy fishing reels especially when used in a heavy flow of water.

After checking the Line lay and setting the drag which is nice, I tied on a Flying C and cast across to the far side of the river. I tried a slow retrieve and let the bait swing into the main current where without raising or pumping the rod I wound as fast as I could, thus creating a huge pull on the reel (far more than in normal circumstances). It was smooth and even though the rod was well bent I could not say I noticed the strain through the reel. A good pass, definitely well geared and good bearings.

Casting was easy, this was largely due to the fact that I was using a good rod, line with a small diameter, a well filled spool and a heavy flying C.  I did try a few long casts down and across and at a rough guess id say I was casting 60m or so. Casting to a distance like this its normal enough to hear the line catching on the lip of the spool. I didn’t notice this and can only assume that what the manufacturers say about the spool lip design is true, it doesn’t impede the line. I would imagine that if spooled with braid casting would be totally effortless.

A pet hate of mine is when anglers neglect their equipment and the main neglect a reel receives is the lack of grease. What I like about these reels is that the manufactures are aware of this problem and have come up with a special grease “Dura Grease”. Basically, its designed to last longer on the gears which is great and will prolong the life of the reels.

I didn’t manage to hook a fish but I did play about with the drag and it is smooth and didn’t stick or jump. The anti-reverse brake worked well as did the bail arm.

I Couldn’t really say I was fishing, what I was doing really was fault searching. I put the reel through a short very hard session in extreme conditions. Certainly not enough of a test to be definitive but enough to give me confidence as a retailer to recommend these reels and that says a lot. I’m the one who is going to get the direct feed back from my customers. The five year warranty is good, I’m not saying that a reel that has been abused or damaged through use will be fixed or replaced but if something fails I believe the company will stand over it.

From reading this you might say I’m a fan of Svendsen and their Savage brand. You might say I’m a retailer trying to sell product. Both are true, Im a retailer who has a genuine interest in the products I sell. I want to offer my customers products that “Work” and not just crap made look good by companies with huge marketing budgets. Been in the tackle trade and also been a keen angler I keep an eye on all the various companies and “Iconic” brands. One thing that I have noticed is that a huge amount of tackle on the market is basically copies of stuff that’s already there. There is a big lack of research and development. This is where I see Svendsen standing out from the others. They are anglers and spend a huge amount of time developing and creating new products that work. For as long as they do this, I will be a fan am happy to recommend them.

My plan for this season is to use one of the more expensive models, the SG8 and see how it works. I’m expecting it to be a pleasure and hopefully ill hook a few fish that will test it properly.