A cool windy morning in Foxford, Its dry at the moment but the forecast is for heavy rain. The river is coming into reasonable order, it is now at 0.85m at Ballylahan bridge and has cleared a lot. The rain will most likely knock it out of action over the weekend. We are busy getting new stock in which brought me to look at reels, spinning reels in particular. There’s a serious amount of them on the market and we have a serious mish mash. The following is a little bit about Reels 🙂 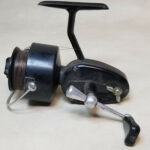 My first reel was a cheap Olympic followed some years later by a DAM prince, they got me started and I managed to catch a few trout.  However I grew up in the era of the Mitchell 300. It was the reel to have. The Mitchell was for real fishermen! In the end I got one and as time moved on I started to build a collection of 300s, most hand me downs donated by older anglers who had given up fixing them and had bought new reels. I learned how to change gears, springs, heads, bail arms and just about anything. This was the great thing about these reels; they were all the same and didn’t change. Parts were interchangeable and readily available. It’s true to say that the Mitchell 300 was a reel for a lifetime. I still have some of the ones I had as a young lad and they still work. Other popular makes and models were the ABU Cardinal and the DAM Quick. All built with pride in their respective homelands, France, Sweden and Germany. Occasionally I put one on a rod and go for a cast, if just to remind myself of what it was like.  It doesn’t take long to recognize that things have come a long way. Agreeably today’s reel are not built to last a life time but in comparison to the old ones they are a pleasure to use. Tangle free, smooth winding, lightweight and packed with features. 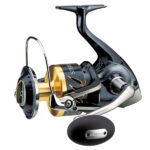 We stock a lot of different brands and models but when asked to make a recommendation I nearly always go for either Shimano or Okuma. These two brands have for us as retailers been the most hassle free and dependable over the past number of years. That is not to criticise other brands or manufacturers. All I would say is that Shimano and Okuma have kept their eyes on the ball and have led the way in developing some fantastic products. Others have rested on their former reputations and have been left behind. The most popular style of reel in this part of the world is the fixed spool. The various manufacturers produce a range of these which fall into different price brackets. Obviously enough, the more you are willing to pay the more “Reel” you will get. Shimano offer many different features including  G-Free Body, Hagane Gear, Cross Carbon Drag, Waterproof Drag, X-Ship, Aero Wrap II, S A-RB, CI4+,Hagane Body, MGL Rotor, One-Piece Bail, Rigid Support Drag, X-Protect, Quickfire II, CoreProtect, MicroModule Gear II, Silent Drive, Dyna-Balance, Fightin Drag, IPX8 Waterproof BodyLong Str Spool, MicroModule Gear, Platinum Premier Service Plan, Rapid Fire Drag, Varispeed.  (Note to self; memorise this list and become a Good salesman ). 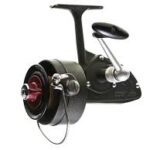 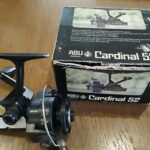 Now, like me you will not know what most of these features are or do but they are what make the difference between a 30 euro reel and an 800 euro reel. Worth looking into if you are considering a larger purchase. The only reason I put this list in is to show the way things have moved on. In the old days anything more that 5 ball bearing was considered top of the range, nowadays the most basic of reel has more features. For the average Salmon angler a less expensive to mid priced reel is going to do most of what’s required of it. The top end of things is really for the Angler who enjoys the extras and for whatever reason can afford it. Regarding size of reel, nearly all the manufacturers follow similar sizing patterns, a size 40 Okuma and a 4000 size Shimano will be similar and will hold similar amounts of line.  2,500 size is nice for trout and in most cases a 4000 size Shimano is ideal for Salmon fishing. Some larger models like the 5000 and 6000 are also fine for Salmon but are getting large, perhaps more suited to dead baiting for Pike or Light saltwater work. Modern reels are not designed with the large spools of the older reels. This is largely due to the fact that lines have become thinner and a lot of anglers are now using braided line which is very fine. 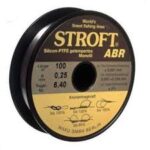 Whatever reel you choose one very import thing to remember is that they all need a little bit of care and attention. Every season I get reels in the shop that are neglected and abused. These reels would have lasted for many years with a little more care. Avoid dropping and banging them, don’t let sand and grit get into them, try to keep them out of the water and definitely keep them away from salt water. The occasional drop of oil on the moving parts also helps.

Between Feb 1st and March 30th anyone who leaves a reel into us for re spooling can avail of a free service (oil and grease)  If you have a reel at home that you would like us to look at, we are more than happy to advise as to whether or not its repairable. This again is something that should be done in the early part of the season as when the shop gets busy getting time to strip down reels can be difficult.