Good morning from a windy Foxford. Its that time of year again and we hope a lot of Salmon are now on the spawning grounds. We always try to get out over the Christmas and New Year period to have a look at the streams and see what’s happening. It’s magnificent to witness a Salmon cutting a redd and to see the movement and interaction between different salmon in a pool. A lovely way to spend a few hours especially on a crisp dry day. We seem to be getting lots of rain and water levels are well up. The river is now at 1.5m at Ballylahan bridge but it has been well over 2m and close to 3m on a lot of occasions in the past five weeks. I was hoping for some frost so the water levels would fall a bit, that hasn’t happened yet. There are still a few weeks and by the look of things none of us will be travelling to far so as soon as levels fall we will go and see what’s happening.

I was going to write a little about the life cycle of the salmon but instead have been cheeky and copied it from the Marine Institute website. Well to be honest they know a lot more about the scientific stuff than I do and just to be sure it’s correct I thought it better to share their piece on the Salmon life Cycle. The following is taken from https://www.marine.ie/Home/site-area/areas-activity/fisheries-ecosystems/salmon-life-cycle .( I know some of you read this blog so I hope you don’t mind )

Irish salmon are Atlantic salmon and spend their juvenile phase in rivers before migrating to sea to grow and mature. To complete their life cycle they must return to their river of origin to spawn. The salmon who adopt this life cycle are called anadromous. 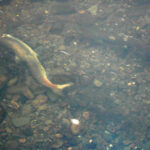 The salmon starts life as a small pea sized egg hidden away under loose gravel in cool clean rivers entering the North Atlantic Ocean. Against the odds the parents of this little egg have succeeded in returning to freshwater to spawn completing their life cycle before giving rise to a new generation. To do this both male and female adults ceased to feed on entering freshwater in response to gonadal development, directing all their energy instead to reproduction. The migration of adults in winter to suitable habitat can commence up to a year before spawning takes place. Spawning typically occurs in headwaters, though it may happen anywhere in a river if a suitable substrate of well oxygenated loose gravel is available. At spawning time (November to January), the female digs a depression in the gravel with her tail to deposit her eggs. One or more males discharge milt over the falling eggs to fertilize. Quickly the female covers the eggs with gravel to a depth of several centimetres which forms a nest or “redd” on the river bed. Buried deep inside the gravel the ova are safe from the impact of debris carried along in heavy floods and from attack by predators 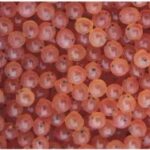 The rate of egg or “ova” development is dependent on water temperature. Eyes inside the pea sized orange ova are visible and increasing movement can be detected as the yolk sac containing food is consumed. The number of ova deposited in the redd is determined by the size of the female with larger females over 10kg depositing 15,000 each. This high fecundity (ova per female) is critical as survival in the wild is extremely low, especially in freshwater. For example, in the Burrishoole River on the west coast of Ireland survival rates for juveniles from 1970 to 2015 was as low as 0.3% in 2001 rising to a high of just 1.3% in 2007. 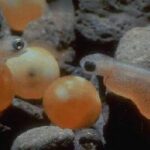 The just-hatched fish are called “alevins” and still have the yolk sac attached to their bodies in Spring. When their yolk sac is absorbed the alevins become increasingly active and begin their journey up through the gravel of the riverbed. When strong enough the small fish must rise to the surface of the water and gulp air. By doing this they fill their swim bladder to gain neutral buoyancy making it easier to swim and hold their position in fast flowing streams. This critical period is therefore referred to as “swim-up” and exposes the young to dangerous predators for the first time. Once they begin to swim freely they are called fry. 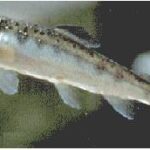 The fry have eight fins, which are used to maintain their position in fast flowing streams and manoeuvre about in the water during the Summer months. Fry feed on microscopic invertebrates and their abundance is regulated by temperature, predation, pollution and competition for food with other fry and other species of fish. The presence of salmon in a river is synonymous with a healthy aquatic environment, and as they are extremely sensitive to changes in water quality, habitat and climate, salmon are a good indicator of freshwater and marine ecosystem status. 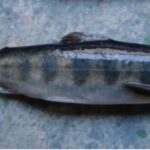 Over the Autumn the fry develop into parr with vertical stripes and spots for camouflage. They feed on aquatic insects and continue to grow for one to three years while maintaining their territory in the stream. Once the parr have grown to between 10 and 25cm in body length, they undergo a physiological pre-adaptation to life in seawater by smolting. This is evident by changes in their appearance as they become silvery and swim with the current instead of against it. There are also internal changes in the salt-regulating mechanisms of the fish. This adaptation prepares the smolt for its journey to the ocean. 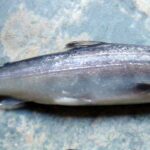 In Spring, large numbers of smolts 1-3 years old, leave Irish rivers to migrate along the North Atlantic Drift, and into the rich feeding grounds of the Norwegian Sea and the greater expanse of the North Atlantic Ocean. Here they feed primarily on fish such as capelin (Mallotus villosus), herring (Alosa spp.), and sand eel (Ammodytes spp.). As they grow quickly fewer predators are able to feed on them. Their rate of growth is therefore critical to survival. 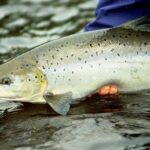 Salmon that reach maturity after one year at sea are called Grilse; these return to their river in summer weighing from 0.8 to 4kg. If it takes two or more years at sea to mature the salmon will return considerably earlier in the year and larger at 3 to 15kg, and because of their size they are greatly sought after by fishermen. Salmon exhibit remarkable “homing instinct” with a very high proportion able to locate their river of origin using the earth’s magnetic field, the chemical smell of their river and pheromones (chemical substances released by other salmon in the river). Perfect homing precision is expected even after migrations over 3,000km to feeding grounds north of the Arctic Circle in the Norwegian Sea and at West Greenland. There is great excitement when adult salmon return to rivers as many are seen leaping acrobatically into the air and jumping over waterfalls while moving upstream. Salmon that survive fishermen, poachers and pollution may still have to scale large dams built across rivers before eventually finding refuge in lakes and deep pools. Arriving upstream on their spawning grounds among big boulders in icy headwaters the life cycle begins again, so ensuring survival of the species for another generation. 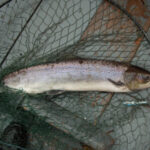 Having spawned, the salmon are referred to as “kelts”. Weak from not eating since arriving in freshwater and losing energy in a bid to reproduce successfully, kelts are susceptible to disease and predators. Mortality after spawning can be significant, especially for males but some do survive and commence their epic journey again.

Hopefully we will et some good images in the coming weeks. From Thursday next 24th We will be closing the shop for a few weeks. We will not be far away though and will report here, stay safe and

A nice morning with occasional showers in Foxford. The river is now at 1.23m at Ballylahan bridge, its falling. It has cleaned out well from

https://youtu.be/yuqmG6g5JzA Click on the link to see the water in Foxford at 5am A nice morning in Foxford and the rain seems to have stopped.