A clearer start to the day in Foxford, we had a few cold mornings this week and yesterday started cold with a thick fog that lingered for most of the day. We were holding out on lighting the stove in the shop but gave in on it yesterday morning, it was Baltic. A little bit more comfort in there now.

No big news from Foxford, the hotel “The Moy” is open for business and seems to be doing a nice steady trade, that should only get better. Last Saturday we took part in the Westport Sea 2 Summitt, an interesting physical challenge and something different. Someone managed to capture this shot of a happy me on my way down the Reek.

No big news either on the fishing front, I spotted two salmon jumping on Tuesday evening. Just before dark I was walking the dog, they jumped in the fast water between the back of the shop and the bridge which makes me think they were travelling. I think its interesting that there’s still fish coming up. A pity that there’s no operational fish counters on the system, it must be a nightmare trying to manage a system without knowing the base figures.

As I said yesterday was a cold start, cold starts always make me think of hot drinks. I don’t think there is anything

better than a hot drink when you are feeling the chill especially in the outdoors. Tea, coffee, hot chocolate or whatever you like, as long as there’s steam coming off it, just the knowledge that its hot is enough to start the internal central heating. All these are easily available at home or from a filling station but what about when we are halfway up a mountain or two miles away from the car along a riverbank. The answer is

The flask is something we have all had experiences with. Mine goes back to my school days when the lads from the country all would arrive into town for school with their flasks and sandwiches in their bags. Every so often there would be a major drama when a flask having possibly got a bang, (accidentally of course 😊) on the ground, the glass inside had shattered, leaving a school bag full of soggy sandwiches, tea-stained books and a young fella crying to the teacher because his father would have no way of bringing “Tae to the bog “and his mother would kill him. Great craic and it took from the boredom and monotony of an otherwise dull place to be on a Monday morning. Yes, they were delicate and it didn’t take a lot to break them (Flasks not country lads). They were also pretty crap at keeping tea hot and it tasted dreadful.

For us anglers the Kelly kettle was the solution to having fresh boiling water. A great device and very simple and clever it had one major drawback. It was big and cumbersome so was not at all suitable for the river or bank angler. It was great in the boat and I have many happy memories of boiling it at lunch time or boiling it several times when the fishing was quiet, there was very often more tea and hot whiskey drank than there was fishing done. I could write half a page on the dos and don’ts of lighting it. Of all my misadventures in this process I think the very wet day when paper and twigs were soaking and the outboard petrol tank was chosen as a primary fuel source would rate among the best, it was certainly the highest a Kelly kettle ever flew and NASA would have been proud of it, but I’m getting off the point now and I did survive. 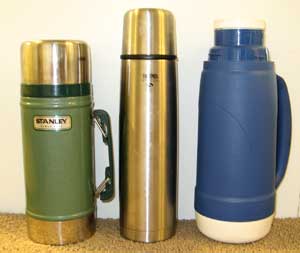 The game changer was the arrival of the stainless-steel Unbreakable flask. A flask that could banged, dropped, bounced off rocks and in general was designed for us anglers. At first, they were expensive and the move to them was slow but like everything they were soon been mass produced and the price came well down. Within a few years they were available in every supermarket and we all had one. The problem was that, just like everything else that is mass produced and sold cheap, quality went out the window. They leaked, the seals failed and they did not keep liquids hot. What good is a cold cup of “tae”.

The final straw for me was in the early season around 2017. I was fishing a two-day competition on Lough Mask. The weather was cold, snow on the hills and a frosty start. By lunchtime on day one I was more than ready for a hot drink. We pulled up onto an Island and with numb fingers I opened my new stainless-steel flask, only to discover the contents were not much more than lukewarm. In the evening as I walked in the gate, I threw the flask in the bin. I went to the press and dug out my other flask, rinsed it out and got it ready for day two. The following morning, I rinsed it again with boiling water before pouring a freshly boiled kettle of water into it.  On day two we got into the boat with snow up to our ankles and as you may guess we were frozen by lunchtime. In my mind I knew that id be OK, I had boiling water with me today and I would soon have a hot drink. No, I didn’t, I had another flask of lukewarm water that was utterly useless. The second flask joined the first one in the bin and I swore things were going to change.

We had for sale in the shop some, what I considered expensive stainless-steel flasks made by Stanley. Although we sold them, I found it hard to justify paying the difference in price. I had my sickening though and was willing to try. I can honestly say I have never looked back. The Stanley does the job its supposed to. If I put boiling water into it in the morning, I can be sure its still boiling hot by lunch time and indeed still warm the following day. It was a good investment and one I’m sorry I didn’t make sooner; the cheap flasks were a false economy. If you are stuck on a Christmas gift idea they have a range of flasks, food jars and travel mugs. We have some of  them on the website https://themoy.com/?s=stanley&post_types=product You will not be sorry, a hot drink on a cold day just makes the difference between enjoyment and punishment.