Good morning from a damp Foxford. Winter seems to be settling in now and we are heading into a windy weekend. There will not be much opportunity for fishing this weekend but no harm in thinking about it and what possibilities there are.

Many of you will have known Kenny Sloan, Kenny was a top class angler and guide. Sadly following a long battle Kenny passed away earlier this week, he will be missed on the Moy and the Loughs around Foxford, R.I.P Kenny.

It’s probably safe to say that most anglers reading this blog are Salmon anglers and don’t stray much from that. The salmon season is short though and it’s nice to have an alternative to fall back on in the off season. Over the next few weeks, we will look at a few different types of angling and perhaps something will appeal to you.

Pike angling:  Not every ones favorite fish and certainly a fish with a bad reputation. It’s debatable how much of the bad press the pike gets is actually true but that’s not something we are going to get into today. In my opinion and in the opinion of a lot of anglers they are a sporting fish and good fun to fish for. Certainly, well worth a few hours on a Saturday or Sunday during the winter. There are angers who specialise in Pike angling and they put considerable time, effort and investment into their sport. For most of us though it’s just what I said, a few hours over the weekend now and again throughout the winter.

If you have not tried pike fishing don’t panic, its actually not a million miles away from salmon angling and a lot of the methods used are very similar. Fly, Dead bait, traditional spinning methods all work well and all these methods can be employed from the shore or from a boat, whichever you prefer and whatever suits your location the best.

One of the nice things about Pike angling is that there’s plenty of places to try and most of them are free. You should check out some of the smaller lakes in remote locations, places that are not fished very often. It can be fun to explore different Lakes, you never know what will be lurking in the rushes. Don’t expect dedicated Pike anglers to tell you their hot spots, most of them guard these very well. 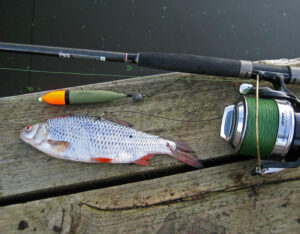 Method: As I said there are several methods that will work well for pike. I’d say, start simple and use a dead bait. If you suddenly find that you are enjoying being out and about you might like to try other methods.

Like most things angling related we all have our own ways of doing things and I’m not for a second saying that my way is the best. The most commonly used bait fishing rig for pike is, without a doubt, the running ledger rig. This bait fishing rig is designed to fish a bait on the bottom of Lake or river. The rig itself is pretty simple and is made up using a wire trace with one or two treble hooks, a weight, swivels, a zip slider, a float and a stopper. For those of you who do some worm or prawn fishing for salmon the set-up is very similar.

The bait, a dead fish can be fished on the bottom or suspended above the bottom. The depth controlled by setting the stopper at the desired level. Try to match your bait with something the Pike will naturally be feeding on. Try a perch or Roach and you will not go too far wrong. Oily fish like herring and Mackerel also work well.

Wire trace:  Buy a pre made dead bait trace, it’s easier than making one from scratch.  Choose one with a good quality wire and make sure the treble hooks are not too large, maximum is size 4 and size 6 is probably more pike friendly. I’d go as far as to say choose barbless hooks or at least flatten the barbs before using the trace.

Float: The float is primarily a bite indicator. You don’t need anything fancy just something you can see on the surface. A worm fishing float like the Moy Bung is adequate.

Weight and swivels: Choose a weight that is heavy enough to sink the bait. The swivels should be of good quality and strong enough to handle a large Pike.

Some people like to eat Pike but the majority of anglers prefer to fish “catch and release”. I have in the past ate Pike and would describe it as Ok but not something id order if it was on the menu. Part of its bad reputation comes from its diet and stories of rats been found in the stomach of dead pike do tend to make it less favorable. Well, it’s up to you, personally I’m happy to take a picture and release any Pike I manage to catch

Where to Fish: Pike like areas where they have some cover to ambush their prey. Edges of weed beds and rushes are good places to try. Inflowing drains and streams are always worth a try as are drop offs. It’s not rocket science, put a dead bait on the treble hooks, wrap it on well with some bait elastic. Cast it to a likely looking lie, place your rod on a rod rest, pull out the flask of coffee and sit back and relax. Enjoy the experience and a fish will be a bonus.

Note: Our web cam is off line at the moment due to technical issues, it will be back.