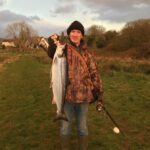 Good morning from a cold and showery Foxford. A noticeable drop in temperatures in the past few days and it looks like this will be the pattern for the weekend at least. The river is now at 0.73m at Ballylahan bridge and coming into nice condition. Congratulations to john O’Connell who took the first salmon of the season from Foxford salmon Anglers Bakers fishery, just south of Foxford. John was worm fishing on Tuesday afternoon when he caught his fish.

As things start to open up a bit more in the coming days we should see a few more anglers on the river and a few more fish been caught. I myself have gathered up a few interesting lures and am looking forward to getting to the beach for a try at the sea trout. P.J and I also have a return visit to make to a mountain Lough.  All this has to be done before the shop re opens and the madness begins, let’s all pray for some better weather in the next couple of weeks.

Paddling under the bridge, Callow Lough

Callow from the Kayaks

We had another outing on callow Lough on Saturday last. Conditions were not as good for fishing as they were on our last day out. The day was less windy and at times the sun was shining bright. This did not really matter as we were on a different type of mission and we did not care to much about “ideal conditions”. This time we were using Kayaks, a very interesting way to fish. It’s something I have done a bit of in the past but the Kayaks have been laying un touched for several years. It’s only when my son Mike said he would like to try the kayaks on callow that I agreed to give it a go.

Not been experienced Kayak anglers we opted for the safety of having a boat on the water along with us. P.J doubled as support boat man and photographer for the day. On arrival at the lough launching the kayaks was very simple and we were on the water very quickly. We set of and paddled along the shoreline to the top of the Lough. This is where I would say the first noticeable difference in fishing from a Kayak or a normal lake boat becomes noticeable. Been able to paddle over the shallow water and through the reeds the beauty of the lough and the many features are more apparent. I could quite easily have forgotten about the fishing rod and just spent the day paddling.

On reaching the top of the lough the water was flat calm and it was pretty obvious we were not going to drift. Instead we spread out and started searching our way along the reed beds. It was very interesting to watch the behavior of the fish that did not seem to take a lot of notice of the kayak. This is possibly due to the fact that it sits low on the water and can be moved silently.

Little pods of trout were moving along the edge of the shallow water about ten meters from the reeds. Its difficult to say what these trout were feeding on but it was certainly sub surface. Casting to the pods and slowly retrieving nymphs we both managed to hook a couple of trout. 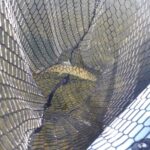 A nice little Brownie in the net

Mike stuck one half decent trout which he lost.  Apart from this the fishing was quiet. Neither of us was surprised or disappointed. It was a nice afternoon on the water and an interesting experience. This outing has re awoken my interest in Kayaking and got me thinking of the many possibilities for some very good fishing later in the summer. Some early mornings ahead.