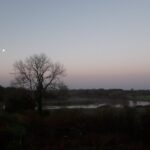 Good morning from a bright, dry and slightly cool Foxford. Easter has arrived and still no hugely positive news on travel. It looks like it will be another while before we are permitted to move about. On a more positive note, its a beautiful morning, I’m writing this , you are reading it and we are safe and healthy. The river is in nice condition and looks good. I think there will be a salmon or two caught over the next few days. Although that been said, angling pressure is Nil. I said last week that we planned to get out on Callow Lough for a few hours. The weather was not good and the start was slow but we did manage to get out there. 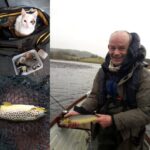 P.J and the Cat that wants to go fishing.

Sunday started of wet and the forecast was for strong to gale force winds in the afternoon. It did not sound great but it was mild and Callow, nestled in a valley is one of those Loughs that can be fished in a strong wind. The rain was to lighten as day went on so a slow start was called for. This suited us both; we were very relaxed about our outing and in no panic. It was a few hours out to wet the lines, blow the cobwebs of and make a start. A while spent setting up the rods at home and choosing some suitable fly patterns, helped by the cat.

As is normal enough on the first outing of the season there can be hiccups. I had checked the outboard was running, made sure the boat was sea worthy and had even managed to remember where I put the bung last October. I was actually thinking things were going good. At 11am we hitched up the trailer. Less than a minute later we discovered one of the trailer tyres was flat! Yes we had a spare tyre but no we didn’t have a wheel brace to fit. To make a long story short we finally launched the boat at 1pm. At this stage the rain had stopped but the wind was blowing and the Lough looked lively.

The launch went smoothly and within a short while we were motoring up into the wind. Although the Lough was not rough the wind was gusting and for comfort we headed to the shelter at the top of the Lough. P.J had opted for a midge tip line and I was using a fast intermediate line. We both had identical three fly casts with the exact same patterns. On the first drift he had three fish while I didn’t have a single take. The trout in Callow are generally small, average of about half a pound in weight. The fact he had three and one was over a pound got me thinking. As we motored back up to the top of the drift I changed my line. I can’t say for definite if this made a difference but it wasn’t long before I started moving a few fish. These little brownies are wild, lively and fast. It takes a while to get to grips with them and I missed several before finally connecting.

I’m not going to bore you with the details of every trout we rose or caught but we certainly moved a lot of fish. What seemed like minutes was five hours later as we headed for home. We had exceptional sport and it is a day we will both remember for all the right reasons.

Two for the Lunch

We kept two trout for lunch the next day and all the rest went back so there’s plenty for you to enjoy. Callow is one to remember when it’s too rough for the Big loughs .