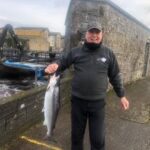 Good morning from a cloudy but dry Foxford, it looks like a nice day ahead. The first salmon of the season on the Moy was taken last Saturday morning. Peter McHugh was the lucky angler who caught the beautiful 11lb fish. Well to be honest it was more than just luck, perseverance played a large part. Peter who is a very active member of the Ballina salmon anglers and lives close to the Moy in Ballina has fished every day since the season opened on Feb 1st. Congratulations Peter. Later in the week we heard of a cracking 25lb fish taken on the River Drowse. Hopefully these two fine early fish are a sign of good times ahead.

Foxford Salmon anglers Bakers fishery south of Foxford has had a “hair cut” and is looking a lot more accessible from an angling point of view. The work is been carried out by the OPW. Thankfully they are not totally clearing the banks as we have seen done in the past. There seems to be a bit of thinking and certain trees have been left while a lot of scrub has been removed. The area in question holds a lot of fish but because it had become so overgrown was unfishable. This season anglers will be able to fish a few places that have not been fished for decades. Something to look forward to.

Its now coming to that part of the season where the cobwebs are been blown of the rods and anglers are starting to have the occasional throw. There is never a season that we do not meet at least one happy angler proudly displaying a Kelt. Its an easy mistake to make and any of us can make a mistake. Here’s a little bit of info on the difference between a fresh run Salmon and a Kelt. No harm to share it with others and especially newcomers to the sport of Salmon angling

Kelts/Slats: Are salmon which have spawned and are making their way back to the ocean. If this Journey is successful the Kelt which is worn out and emaciated after several hard months in fresh water can once again feed, regain strength and condition and perhaps make a second return to its river. Only this time as a Larger Salmon. Identified by the thin shape, distended vent and presence of “gill maggots” on the gill filaments, Kelts are frequently encountered by anglers in spring when they regain a silvery appearance and can be mistaken for fresh run Springers. On the Moy it is not uncommon to hook a Kelt as late as the end of April. It’s easy to get excited when we catch a Salmon but let’s not get too excited before we first determine that it is a fresh run Springer. By Law, Kelts Must be returned unharmed to the water. 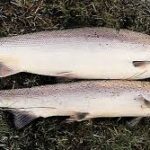 Spot the difference. Fresh run fish above and Kelt below

Fresh-Run Salmon: Recognised by the pristine condition, bright silver flanks and thick girth. A Salmon straight from the Ocean will have loose, easily detached scales and many carry sea lice which drop off within a few days. Spring Salmon rarely “show” themselves, on most occasions they make a Boil in the water without jumping. Kelts on the other hand jump frequently and Tail walk across the surface. During the Spring period if you see a fish jumping several times or splashing on the surface its most likely a Kelt, move on and leave it alone. When hooked a Spring Salmon Fights hard, will make several runs and will stay deep in the water. A kelt may attempt to fight but after a few minutes and a couple of half-hearted runs will come to the surface. 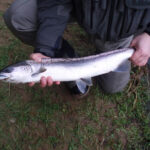 Normally thin with a flat belly.

Fins and tail are ragged.

Gills are pale colour with maggots. 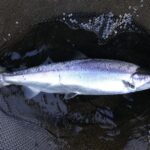 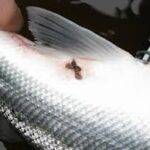 May have sea Lice attached. 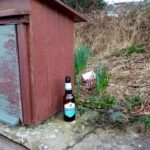