Good morning from a damp Foxford. We have had a little bit of everything nasty in the weather recently. Rain, hail frost and wind. We tried an evening at the seaside mid week, caught a couple of dog fish but it just got to cold. Taking the rod apart with cold hands got me thinking about rod joints sticking and the nuisance it can be. Here’s a little piece about a rod that got stuck together which gave me some satisfaction to finally separate and a few little tips on how to do it.

A friend of mine has a little sage rod that he has a particular fondness for, it’s his dry fly rod and at 9 foot in 4 pieces he can easily carry it 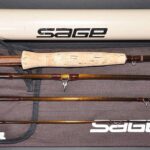 safely in its tube without it getting in the way. That is now that we managed to get two sections that had been stuck together for over a year apart. It all began one day after a local competition. The morning had started with rain and as he prepared to put the rod together he laid the sections out on wet grass, thus the rod get wet. As he assembled the rod he slipped the tip and second sections together and as he did so he noticed that they slipped that extra little piece. He fished on for the day and it was not until evening that he noticed the two sections were well and truly stuck. As is the case when things like this happens advice came from all angles and there was the very normal spectacle on the lake shore of several “strong lads” having a tug of war using the two fragile sections as a rope.

You see this is a regular occurrence and we have all probably had a rod stick at some stage. In most cases we manage to get them apart but in this instance there was no moving it. By the time the rod get to me a few weeks later it bore the marks of rod that had been through several hands and all had failed to separate the well stuck Joint. 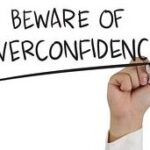 In the tackle trade we see things like this all the time. We have learned the “tricks of the trade” to deal with them and most tackle dealers will manage to get a stuck rod apart, without resorting t 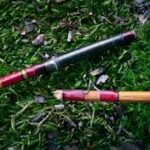 This can easily be the result

o a vice grip. It is a job that most tackle dealers don’t want to tackle because it can easily result in breakage.  I was pretty confident that I would sort the problem. Well to cut a long story short I had the rod for a week and tried several different things to get it apart but to no avail. It was well and truly stuck and I was left scratching my head. My friend would have to struggle on with his now 3 piece 9 foot Sage. He even managed to find a tube that it would fit in. He’s a bit of a perfectionist though and this was not going to do. Over the next year I occasionally heard about the problem and I did promise to have another go at it. I heard some of the things that various people had tried or were trying and some of them were actually close to smart. No one succeeded though and my friend was left with his dilemma. In October he was at the stage where he was ready to reinvest. We decided to have a final try at separating the stuck joint.

Plan B get advice

So when faced with a problem and all the solutions you rely upon are exhausted what do you do? You seek advice from someone who knows more than you. I duly made contact with our rod manufacturers who told me they have the technology and were very happy to help. All I had to do was send them the rod sections and they would take them apart. I replied and told them that I was more hoping they would be kind enough to share their secret and tell me how to do it. They didn’t laugh because that’s not something they do. Their reply roughly equated to yes of course we will tell you but then we will have to kill you! I decided to try another approach. In my next email I mentioned that I wanted them to start working on a new model of spinning rod for the shop and amazingly the reply came back with detailed instructions on how to un-stick any rod joint, Bingo. I tried it on the Sage and it worked a treat. The sections came apart without any damage and the rod is fine, Satisfaction. It’s the little things that make us happy.

As I took my friends rod sections apart I made a little video of the final piece of the process. It doesn’t show the whole process (Trade Secret) but you might get some ideas.

I know that many of you have rods stuck together and would like to know how to get them apart. Here’s a few little things to try.

Try shaking the rod from side to side in cold water. If not badly stuck this will sometimes work the joint free. 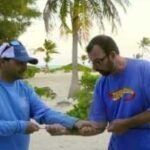 Make sure the person helping understands that you’re not having a tug of war and rods are fragile. Do not use the guides for grip! Facing each other, you both grab the rod one hand on each side of the stuck ferrule, just as if you were doing it by yourself but with your arms crossing theirs. You want to be working as a team and pulling the same direction at the same time, essentially doubling your strength. Pull straight and do not bend the rod.

Behind the Knees, a good method

Behind the knees method

Best done outside where there is plenty of room. This method takes advantage of leverage obtained from the extra power in the legs. Hold the rod behind your back. Squat down with your knees together. Lower the rod towards the ground placing it in the bend of your knees with the stuck joint between your knees. Now, making sure you have a firm grip on the rod, one hand on either side of the stuck ferrule and with your hands/arms tight against your legs, push outward against your arms with your legs pulling the sections apart.

If this is not enough, of course we are available at the shop and we will always do our best to help.