Good morning from an overcast but pretty mild Foxford, the last couple of days have been nice and the floods are receding. I mentioned last week that I have been fixing up an old boat. We had a trial launch last Sunday. The plan was to do a little bit of Pike fishing but that did not work. The steering failed; they just don’t make quality cable ties anymore! After that I spent the evening tidying away my Salmon gear. My chest waders are tired looking and next season I will need to invest in a new pair. We get asked by a lot of anglers what are the best waders to buy. We try to answer honestly and give good advice. Hers a little bit of info if your waders have seen better days. 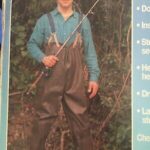 Whether we class the Chest wader as a piece of Clothing or equipment it is a vital item for most anglers. In the old days the chest wader was made from heavy rubber with a fairly rough rubber boot attached. Pretty crude and ill fitting they served a purpose but could not be described as comfortable. Arthur Oglesby and Hugh Falkus always had a pair and the angler on the front cover of Trout and Salmon would wear a pair of rubber chesties while displaying his/her catch from the Spey or the Tweed. Time and things have moved on and the chest wader has come a long way in the past 30 years. 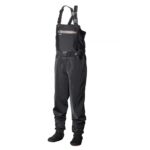 Sometime in the 80s neoprene waders arrived on the scene. A revolution, they were marketed as warm and comfortable. Warm they were, on a hot day it was torture.  Made of the same material as the traditional wet suit it was fashionable to wear them tight fitting, not something for the faint hearted. The struggle to get them on and off was another story and as a Guide helping often overweight anglers with that task was like a bad scene from are you been served. There were those who believed the secret was to wear the wader without clothes underneath which led to a lot of giggles and near crashes on the side of the N5. The ill fitting rubber boot was largely (although not completely) replaced by the stocking foot wader and separate boot. This was one of the most significant developments. It now meant that a good quality boot that was comfortable could be worn and walking was easier. The stocking foot was also more compact and easier to transport. 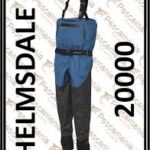 In the 90s, breathable Gore-tex materials started to appear and this was the advent of the Breathable wader as we know it to today. Lightweight and very compact, breathable was the ideal invention for the travelling angler. There was teething problems, mostly with leaking seems especially on the joint of the stocking foot.  In the beginning there was only a few manufacturers and all breathable waders were very expensive. Like most “new things”, after a few years more companies started producing them and the price came down. Prices vary greatly but now even the cheaper ones are pretty good. None of them are “Bullet proof”, breathables are NOT made for the angler who likes to hike through gorse and bramble, are certainly not a match for barbed wire and in general require care and need to be treated with respect.

If you ever want to make a tackle dealer cry just tell him your breathbles are leaking and you would like him to fix them,  Leaks are very difficult to detect!. 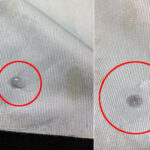 Once you have advanced to breathable and used them for a while it is very difficult to go back to rubber or neoprene. They don’t last a lifetime but overall are a good product

Thinking of buying here’s a few points to consider

Where do you fish?

For the angler who battles through rough vegetation, slides down the bank and is in general rough, breathable is a NO. Consider a pair of cheap rubber waders that can be patched easily. Ocean have a very good model which is good.

Do you walk a lot?

Walking for long distances in a boot foot wader (i.e. boot attached) is a bad idea. In general the boots do not fit very well and are not designed for hiking. A stocking foot with a good quality boot would be a better choice.

Not that any of us are going too far at the moment but it is a consideration. If you plan to head of for a long distance fishing trip then breathable stocking foot with a separate boot is far easier to pack.

Do you fish most in winter? Spring or Summer/Autumn

For the winter angler, neoprene could well be the best choice. They are warm and snug. For the remainder of the season I would recommend normal rubber or breathable.

What is your budget? 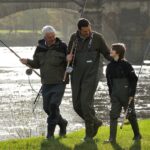 Rubber /P.V.C will be the least expensive (Guide price less than 100 euro), Neoprene (Guide price 100 to 200euro) https://themoy.com/product/scierra-neo-stretch-wader-stocking/, Breathable (Guide price 200 to 600euro) https://themoy.com/product/scierra-helmsdale-waders/. Consider, realistically the life of a pair of waders is one year, anything after this is a bonus. I know you may well be saying that you have a pair for several seasons and they are fine. True, this may well be the case. From experience in the shop most waders and breathable in particular are showing signs of wear and tear after one season. All waders need care; clean them regularly and when storing them for a period of time hang them up. 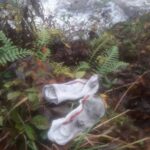 While visiting a stream earlier this week I found these socks on the bank ??