Good morning from a dry and cool Foxford. Not far of frost these mornings but we have had a few beautiful days.

Well we finally made it to the Hill lough I’ve mentioned a few times. Click the link below to watch a short video.

Putting our products to the test

This is a Hill Lough that I fished some 20 years ago, a re visit has been on the cards for some time now. The Lough in question is called Lough Alone and is in the Ox mountain range on the Mayo Sligo border. There’s a few of these loughs within a short distance of each other up there and all are reputed to hold good stocks of trout. We started the planning during the early stages of lockdown last march but as life often has it, things did not work out. The summer was a tough period for us and we could not get a chance to go. It was forgotten about for a while but as the season drew close to the end we again started planning. We dug out the rucksacks which had not been unpacked since March and did a little bit of prep. It’s not that the plan was going to involve any major hiking or anything dangerous but it’s always better to go prepared for the worst and hope for the best. I won’t go into detail just now but you can trust me when I say the bags were well packed and heavy!  The new plan was to visit the lough as soon as the salmon season ended on the last day of September. 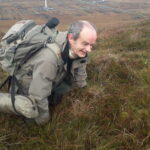 P.J on his knees ,a moment of reflection

The first weekend after the season ended we were up early on the Saturday and ready to go but on arrival we could not see the mountain. Sunday was the same; the weather was brutal, heavy rain and wind so once again we failed to make the pilgrimage.  The trout season on a lot of loughs continues until the 10th of October. This lough was the same and so we still had the following Saturday, we hoped for better weather. Saturday came and the morning was wet, Im not going to bore you with the weather details but we were lucky enough to get a window of opportunity. We had the luxury of Google maps to plan the best route and I would say that yes we did pick the closest possible route, I’m not for one second saying it was the easiest one. I certainly was happy to have a change of clothes with me when we reached the top of the mountain.

As you will see in the little video I made we had a wonderful time. We hiked, fished and eat then hiked and fished some more. We didn’t catch any big fish but I do believe the potential is there and I will be back.  I would happily stay up there for a week and a visit to a remote hill lough is something I would recommend to anyone. 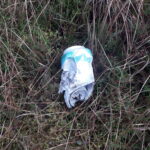 “Litter” The mark of the Gobshite

Just one little thing annoyed or upset me and that was the fact that the proverbial “Gobshite”* had been there before us. He had managed to bring his full beer cans up the mountain but for reasons only he and his ilk will know thought it best to leave the empty cans after him. This mentality is sad to say the least. It destroys nature. A friend has suggested that we include something in the blog to encourage people to take their rubbish home and stop this behavior. I know that a gobshite will always be a gobshite and nothing we say or ask will change them but for the decent people out there I would ask that you please consider the future and take your rubbish away. From now on as a reminder and in the hope that we can work together to solve the problem of Litter on our river banks and everywhere else I’m going to end the blog with “Leave no trace”

a mean and contemptible person, especially a braggart.

a stupid and incompetent person.