Good morning from a slightly damp but not to wet Foxford. The weather for the past few days has been reasonable and water levels while still very high are starting to come a little closer to what they should be. Some rain promised tomorrow but hopefully in the next few weeks the River will come into good order. Ive done a little piece on Lough trout flies. its nothing major but might help someone who wants to start Lough fishing or just wants to have a reasonable selection of flies in their box just in case the opportunity arises to try a Lough. 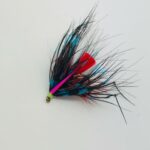 Not taking into consideration hook style and size the main difference between trout and salmon flies and indeed trout and Salmon fishing is that Salmon don’t actually feed in fresh water while trout do. When fishing for Salmon using a fly we are trying to evoke a reaction. Instinct, memory or aggression, hence we use patterns of flies that do not represent the natural winged insects or their earlier stages of development which we see around us while fishing. While fishing for trout this is our first form of attack, “Match the Hatch”. We observe what’s happening in the air, on the water surface and if possible below the surface. We fish with patterns and methods that best mimic what’s happening in the trout’s natural world. If you think salmon flies are confusing and that there are hundreds of them to choose from well its nothing when compared to trout flies. There are literally thousands of patterns available. All of which will work at some point. I’ve often heard it said that most trout anglers have six boxes full of flies and actually fish for most of the season with six patterns.  While there is truth in this these anglers did not go out and buy or sit down and tye 600 flies for no reason. At some point there was thinking and reason. I myself have several boxes of flies that for the greater part do not see the light of day. It is however especially rewarding when on a “tough day” something clicks. A memory of a pattern that worked five years ago on a similar day, a frantic search through boxes and there it is. You tie it on and it works. That’s the moment you understand why trout anglers have six boxes of flies. Patterns and styles evolve and change but you can always find a gem sitting in an old box. This been said, not everyone wants 600 flies as ornaments. For the angler that wants a compact selection here’s a good way to think about it. Firstly I would divide the season into three parts, early, middle and late season. After that study where you will fish and try to figure out what natural flies or insects will be about. Thirdly, try to pick three or four imitations that will cover the most situations.

Early season, February to April: In this early part of the season generally temperature will be low and the amount of natural fly life will be sparse. Primarily a few Chironomidae  (Buzzers or Duckfly). Trout will spend a lot of time feeding below the surface on shrimps and louse although they will also take smaller fish where available. A lot of trout will be feeding in the shallows, mostly taking shrimp and louse from around the stones. Patterns worth having would be a few buzzers (traffic light & Pearly Holo are two good ones) an adult duckfly imitation , a few general purpose wet flies like a Jungle Bunny, Fiery brown, Peter Ross and silver dabbler are all worth having. For fry feeders, a humongous is well worth a try.

Mid Season April to July: As air and water temperatures rise the amount of natural flies hatching will increase. Olives will make an appearance followed by May flys and sedges. The Lough angler will start to see more action on the surface and dry flies will start to work. A few dry Mays such as the single feather May, The Bog Bay mayfly and a couple of wulffs are worth adding to the collection. Add a golden olive bumble, claret dabbler and a green peter to the wet selection. 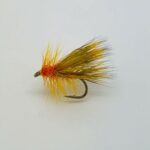 Late season July to September:  The Lough angler will have most sport in the mid to late afternoon. A good period to strip wet fly patterns and an intermediate line can sometimes be a good addition. Add a Silver daddy and a detached body daddy to the selection.

As I said this is not a full list. We are always happy to advise on the best patterns for a particular period or Lough.https://themoy.com/product/flies-of-ireland-from-basil-shields/