I said last Friday that the weather over the weekend would knock the river out of action and I wasn’t wrong . We had a serious flood. Not as big as a few years ago but not far off. On Sunday morning the water was touching the road at Ballylahan bridge. The road upstream of the bridge was closed due to flooding as were several others. Lough Cullin was flowing back into Lough Conn at an amazing speed https://www.facebook.com/tiernanbros.foxford/videos/484160108948751/.  Another storm, Dennis is on the way this weekend!, We live in interesting times. There’s not much to report on the Salmon angling front so here’s a little piece on yet another alternative to river Salmon angling. Sea trout from the Coast. 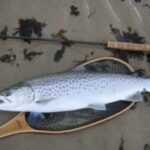 Sea trout fishing from the coast is something that is taking off in this area. Not that many years ago it was almost unheard of but now we see lots of anglers venturing out on the beaches in search of sea trout and the occasional bass. For your average traditional salmon angler this is a venture into the unknown. It can be daunting and there’s a lot to take into consideration, tide times and heights, location, bait among others. I would say don’t panic. Go with an attitude that it’s a day out trying something different while Salmon angling is not at its best, nothing to be lost. The best evening I ever had was when P.J and I finished work one evening and said we would throw two rods in the car and head to a beach. It was a beautiful summer evening and we were happy just to go for a walk. With minimum gear and very little preparation we arrived at the beach. Within 10 minutes we had our first trout. We fished until near midnight catching trout after trout. Despite returning to the same beach many times since, it has not happened again. We were lucky and the point is you don’t need to be an expert to try something different out.

There’s a lot of debate as to the best stage of tide to fish. Personally I like the last two hours of the going tide and the first two of the coming tide. I have spoken to anglers, some far more accomplished than me and from what I can gather it’s possible to take a fish at any stage of tide. Location and the ground your fishing over is probably more important. Not many anglers are willing to share information on their favorite places. A friend of mine was telling me one day that he and another guy had some great sport and caught some really large sea trout. I innocently asked where, he smiled and said ill take you some evening. I said great, to which he replied “yeah no problem but I’ll have to blind fold you and put you in the boot” that ended that conversation.  I suppose we can’t really blame anyone for not wanting to give away the location of their special spot. It took a lot of time, trial and error to find it. Its time well spent though and it is rewarding when you finally come across a place where some top quality sea trout are milling about.

Regarding baits to use. Natural baits like sand eel and mackerel strip are popular but lures are certainly becoming more popular. Some of the better and more popular lures come from Scandinavia and why not. They have been catching record breaking sea trout from the shores for decades and are light-years ahead of us in this type of angling https://themoy.com/product-category/sea-trout-bass-lures/. Fly fishing works as well but Do Not bring your best outfit. Salt water is very un-kind to equipment and even with care it still gets inside reels and eats through rod rings.

From a safety point of view. The Atlantic Ocean can be dangerous. Take appropriate care, wear a life jacket and just don’t take stupid and unnecessary risks.

Regarding License’s and season. Yes you must have a license to target Sea trout. I have only targeted them in the summer months. I’m not exactly sure of the “open season” in various regions or districts. I have asked IFI for some clarification and will post this when I get it. For now check with them yourself before heading out.