Christmas break is now over and we are into the New Year. Since my last blog on 03/01/2020 I took a short holiday in the winter sun of Gran Canaria. Nice to recharge the batteries but some shock to the system coming back to 3 degrees, hail and wind. No mercy from the boss it is straight back into work and preparation for the coming season. In fairness to him he did attend a couple of trade shows that were on while I was away. He seems pretty upbeat about all the new products available and assures me he hasn’t ordered excessively, we will see as the boxes arrive.  The reason I mention the holiday is that I made it a bus-man’s holiday and did some fishing. I knew from previous experience that a week of sunbathing was not for me.  In the past while on holiday I have tried for tuna and can’t really say I enjoyed it. I found it very “touristy”.  Before setting of I googled fishing in Gran Canaria and surely enough I found something of interest. Carp Gran Canaria, https://www.facebook.com/CarpGranCanaria/.  Something a little different and why not. Carp is a species that I have heard lots about but never really had the opportunity to try for.  I booked a day. 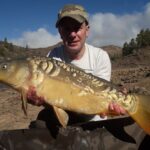 On the chosen day I was picked up by David (The Guide and guy who runs the operation) who introduced me to Kieran an English man who was also having a day out, not his first though. Both David and Kieran were what we could call true Carp Anglers and Mike was in at the deep end. We had an hour to drive to the lake and most of it as uphill and we’ll into the mountains over 1000m above sea level. The conversation on the way to the lake was Carp, bivies, bolies and long sessions. To be honest when I heard we would be finishing at 3 pm I was relieved.  These lads were talking about days and nights and as much as I wanted to try for a Carp I wasn’t prepared for that. We got to the lake, beautifully remote and scenic. David has a good setup in place, a bivey, some seats, a boat to set baits at long distance and generally everything necessary. Without boring you with details of set up, bites, runs, lull periods and catches, the day was interesting. We caught a total of 5 carp, the largest just shy of 20lb. All fish were carefully handled and released. The two lads were very pleased with our success. Average too good for the lake and above average for UK standards. For me it was something new and it was fishing and as I always say there’s more to fishing than catching fish.

All this has brought me to think of what the alternatives are to salmon angling in our own area. For the guy who’s on holiday and either is not a salmon angler or just wants to try something different. I’m going to start with Lough fishing for wild brown.

Loughs Conn and Cullin are situated approximately 5km from Foxford. Both offer excellent brown trout fishing with the chance of taking a salmon as well. Fishing on both loughs is free but if fishing for salmon or seatrout a license is required. While in some locations it is possible to fish from the shore boat angling is by far the best. Boats can be hired locally and Gerry Murphy at Murphy boat hire is a good man to talk to https://www.facebook.com/profile.php?id=100009809470807&lst=100000972316746%3A100009809470807%3A1579277758&sk=about. If it’s your first time trying these Loughs I would recommend hiring the service of an experienced boat man. This is not solely from a Safety point of view but for the best chances of success. No matter how keen a trout angler you are nothing beats a bit of local knowledge. The boat man will be keyed into what’s happening, where trout are located and what they are taking. With regards to safety, Lough Conn is well marked with orange markers on most of the rocks and shallow areas. Lough Cullin while marked is still pretty treacherous especially on a windy day. A lot of the Lough is very shallow and there are numerous un marked rocks. On the plus side for Lough Cullin, due to the shallow waters and abundance of rocks, trout can be caught almost anywhere. On Lough Conn the drifts are more specific and again this is where the experience of a local boat man comes into play. Notable periods on both Loughs generally coincide with fly hatches. Lough Cullin gets a big hatch of duck fly early in the season, around March. Followed by olives in April. The Mayfly normally hatches pretty early in Cullin as well, depending on weather it can start in April and is normally coming to an end by the third week in May. With the exception of some of the shallower bays the Mayfly hatch on Conn is later, starting early to mid-May and ending in early June.  My favorite time of the season on Lough Conn is from Mid-August to the end of September. Fishing at this time can be exceptional and the Lough is normally deserted. It’s no exaggeration to say you could be the only boat on the water. Neither of the Loughs are noted for large trout, plenty in the 10 to 12 inch bracket and the occasional larger fish. Good sport on wet and dry fly’s and in general a nice day out.

A less well known Lough is even closer to Foxford, Callow Lough. Situated on the N26 between Foxford and Swinford. Callow can be an excellent early season Lough. Noted for small free rising, hard fighting brownies. Callow comes into its own from March through to May. It continues to fish throughout the summer months but primarily in the late evening. A very under fished Lough it is certainly a good place for some fast action. One thing that I really like about Callow is that on a really windy day when boats are blown of the bigger loughs callow is sheltered and can still be fished.