Its been a wet and windy week in Foxford and it continues, no shortage of water. We took delivery of the 2020 Salmon Licences this morning which signals the New season is just around the corner. Its been a busy week for us. As most of you know we sell fresh fish as well as fishing tackle. We decided to buy a new stainless steel serve over. A bit like the Governments new printer we got the measurements wrong. Unlike the Government we couldn’t increase the budget and have someone fix the problem, nope we had to get the angel grinder out!. Hence I did not get a chance to prepare anything about angling methods or the river in general. 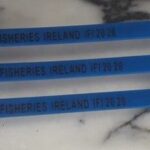 Recently I read a copy of a generally well drafted letter which carefully outlined a lot of problems facing our sport and in particular the river Moy. The letter was to be addressed to Government ministers, C.E.Os and lots of people in power. It had several suggestions as to the causes and how to remedy these problems. One issue I had with the letter was that in my opinion it lacked Balance. It was written from one man’s view of the situation and outlined his points of view without regard for the thoughts, ideas and indeed consequence for others.  While I did agree with parts of the letter it certainly was not going to get my support or indeed the support of the majority of anglers in this area. This led me reflect on not only the problems facing our sport but on how we as Anglers view and deal with these issues. In most cases it appears to me that we as anglers who enjoy the sport of angling in its many forms, share a love and respect for our quarry, nature, environment and future of our sport, have different points of view. Rather than have rational debate with sensible reasoning to find a Balance for the good of all, we tend to go on the “Solo Run”, the results of which, if we are honest, are unsuccessful. 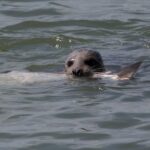 One platform where this has become very obvious is Facebook. Here we see and hear the differing and unbalanced opinions on all subjects. The keyboard warriors let fly with all the ammo at their disposal to Air their opinions. In many cases without thought, annihilating innocent people. Earlier this season I had opportunity to take a picture of a Lady with one of the few salmon she kills in a season. She wanted the picture posted on our Facebook page so that a relative living far away could see it and perhaps share in her Joy. We both agreed it would also be a little bit of badly needed publicity for the locality. Within minutes of the picture appearing so did the comments, some very positive and congratulating, others were to say the least unbalanced. Among them “Catch and release” and “why kill”.  Neither of these comments were balanced, they were one sided opinions been expressed in the wrong place. Neither comment took the facts of the situation into account nor did neither comment achieve anything for conservation.  “Catch and release”, Yes if you want to catch and release, that’s fine. “Why kill”, well for a start, it’s not against the law, it’s where our sport evolved from and some people actually like to take a fish home to eat! The people who wrote these comments could achieve a lot more for conservation by acting in a more balanced manner. The Lady in question killed two salmon for the season. On a regular basis I see Flocks of Cormorants flying over my house, these same Cormorants have come from the Loughs and tributaries of the Moy catchment where they have spent their day “Fishing”. Now I’m no scientist but I think any Cormorant is responsible for the deaths of more than two salmonids in a season. The Moy estuary is full of seals, the amount of seal damaged fish turning up in the river is alarming and these are the fish that escape! How many are killed? This is not to mention, water quality, farming practices, Poaching, sea survival and probably ten other major factors which affect salmon. It’s very easy to hop on the “in fashion” popular trend and preach it to the multitudes in a holier than thou manner while ignoring the not so popular facts. The Lady who killed the two salmon is easier to attack that the seal that killed 100 salmon in the same period. 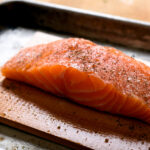 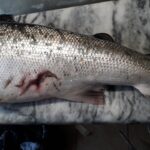 I’m not saying that we get together tomorrow and kill every seal in the estuary or every cormorant on Lough Conn. I am saying that we should have respect for each other and work together. Let’s not forget where our sport comes from and let’s teach future generations how to enjoy and care for it in a balanced manner.