A nasty dark winters morning in Foxford and the forecast is for more of the same. Had planned to go fishing on Saturday but that has changed, might get the Christmas shopping out of the way :). This weeks article is a little bit on the Bubble and Fly. I hope you find something of use in it, if you do please share it with your friends. If you could also give our Facebook page a Like and share (it all helps) https://www.facebook.com/profile.php?id=847545021987381&ref=br_rs

The Bubble and Fly

Generally two flies and a weighted bubble float cast across the river and retrieved slowly, it’s simple. So simple that most people don’t believe it can possibly work. So simple that for a lot of people it’s “to easy”. Well it does work but it’s not that simple and it doesn’t work on its own. It needs an Angler to make it work and there’s good anglers and not so good anglers. One thing for certain is that it’s a visual and exciting method, not boring. 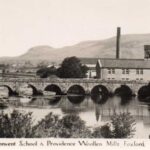 It’s extremely difficult to find out where or how this method originated. I have spoken to a few of the older Local anglers here on the Moy and none of them seem to know. However, from speaking to them i have come to the conclusion that it arrived on the Moy in Foxford sometime around the time of the drainage, mid 60s. Prior to this the common local practice for fly fishing and in particular for trout was dapping with the “Wall fly”. The Wall fly is a type of sedge which got its local name (I’m quite sure it has a Latin one as well) due to the fact it hides in crevices on stone walls and in particular could be found in the stonework of the bridge in Foxford. A common local theory on the origin of the fly itself is that it came to Foxford in Wool which was imported to the Foxford woolen mills. These wall flies were attached to a hook and using a long rod were skillfully dapped along the surface of the water. This was done from stone perches in the river or from the bridge. It’s still possible to witness some of the older locals practicing the method from the bridge in Foxford during the summer months. 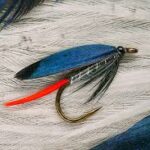 By the time I started fishing in the early 70s Bubble and Fly was a standard method. The reason for its popularity on the Moy I think is largely due to the fact that a lot of the river is not suitable for the conventional fly rod. Steep banks, slow flow and vegetation, It’s just easier to use the Bubble and Fly.  On summer evenings the “Back of the Town” i.e. the stretch of river from Cualass to the Blackrocks, would be lined with locals, mostly youths using the method during the “Rise”. Bags of trout, both brown and sea would be caught each evening and the occasional Grilse would fall for butcher or Black Pennell. In those earlier days the range of Salmon flies available was not great. Primarily large single hook, feather wing and the occasional hair wing. Silver doctor, Thunder and Lightning, Hairy Mary, blue charm and Gosshawk would have been standards. 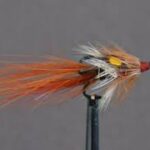 There was always a lot of visiting anglers in the Foxford and Ballina areas and with these anglers came new Fly patterns and styles. Shrimp Flies, hair wings, double and treble hooks. By the mid-80s Irish Shrimp flies had become the order of the day. A variety of patterns emerged and many of them are still favorites today, The Foxford shrimp and Ballina Grey been two of the most notable. I’m not going to get to deep into actual patterns here as it alone is a big topic, many books have been written on the subject. For now it’s safe enough to say that the method works and we know enough fly patterns to cover most situations successfully throughout the season. 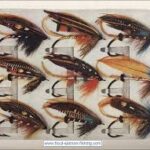 I think the first lesson in bubble and fly fishing comes from the past.  I mentioned already that as young lads fishing the bubble and fly we took the occasional Grilse. It wouldn’t have been that common and most of these Grilse were taken late in the evening just before dark. Yet today this method accounts for probably 20% of the catch on several fisheries every season. So what has changed? Well let’s look at the equipment, system and the materials and compare the differences.

The actual system or set up has not changed. A weighted bubble float or similar, One or two flies, normally two. The bubble can be above or below the flies but on the Moy the most popular is to have the bubble bellow the flies, i.e. on the very end of the leader/cast.

On the Moy in the 70s and 80s the standard rod used for spinning, worm, bubble and fly and everything else was 9 or 10 foot long made of fiberglass. The standard fishing line was Maxima chameleon in 15 to 20lbs breaking strain (0.35 to 0.40mm) and a Mitchell 300 or D.A.M Quick were the standard reels. Salmon Flies as I said were generally large single hooks, feather wing with the occasional hair wing pattern. Now for anyone who has tried the method you are already starting to get a picture. if I were to suggest to an angler today to set up for fishing with the bubble and fly using a 9 foot rod with 18lb brown mono as a leader and two size 6 feather wing flies, I’d be as well to retire. The equipment and materials have changed, as also has our knowledge and understanding and this is the difference.

Today the standard rod for Bubble and fly is 3.3 m graphite with good quality guides, Reels are smooth winding with ultra-sensitive drag systems, Lines are strong with fine diameter 0.25 to 0.30mm and are virtually invisible in the water, flies from size 8 to 16 in a range of styles and colours and anglers in general have more “Finesse”. 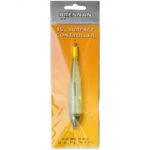 Most good Bubble and Fly anglers will use the same line for their main line and Leader. A well filled reel (it’s a lot easier to cast with a well filled reel) of 0.25 to 0.30mm clear/translucent monofilament. The lighter and finer line been used in very low water conditions ( July, August) the heavier been used in Spring time. A German brand “Stroft” is very popular on the Moy and Stroft ABR https://themoy.com/product-category/fishing-line/monofilament/ is our biggest selling line for Bubble and Fly. The bubble float or bait controller goes on the very end of the line, it is best to attach it to the line using a snap swivel. At a distance of approx. 1.5m away from the bubble (Towards the rod) we make a “Dropper” of approx. 15cm. There are many suitable knots for making a dropper. 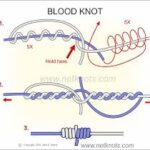 I personally use a blood knot as I have always found it to be reliable and I’m a believer in the “if it’s not broken don’t fix it” theory. Mess around with a few knots until you find one that you have faith in. A second dropper is added at another 1.5m from the first. This give a combined leader length of 3m which is long enough and when using the 3.3m rod is still easy to cast. If the leader is longer than the rod casting becomes more difficult. If the rod you’re using is short it is probably best to use only one fly and give a greater distance between the bubble and it. 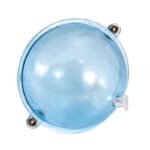 If using a bubble float you will need to put water in it to give the necessary casting weight, approx. two thirds full is good. If using a bait controller, the weight is already built in (C’est merveilleux). The choice of fly pattern and size is dependent on conditions in general. I would say that if in doubt, ask someone for a suggestion. Anglers are normally happy to help each other and we are always available at the shop to give advice. A good rule of thumb is in early season or higher water conditions use larger patterns, size 8 or 10, as the season progresses and levels drop a little, drop down to 12 and 14s and in very low conditions 14s and 16s. Brighter colours earlier in the season and for fresh run fish, duller colours as the season progresses. On the Moy you can’t really go wrong with Orange, Gold, Silver, Blue, Yellow and black. 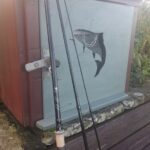 Rod set up, you are now ready to fish. Like everything else it’s possible to catch a fish in any conditions but for success it’s always better to pick the right time or conditions to use the Bubble and fly. Ideally from once the water temperatures have come up a little in late spring, a nice breezy day and a medium to low level of water is best. I would never fish the Bubble and fly in water any deeper than 3m, with 1 to 2m been my preferred depths. The water does not need to be fast flowing but the ripple or wave on the surface is an important factor. A dull day is always better than a bright sunny one but in Sunny weather early morning and late evening can be very good times to fish the bubble and fly. My preference would be the late evening. One of the nice things about Bubble and fly is that even in unfamiliar territory one can be successful. You can quite easily cast all the way across the river and cover all the water. A slow retrieve is all that’s needed but the fly Must “work” in the water. To cast a fly out and let it hang dead in the water been carried by the current is useless. I like to twitch my rod tip as I retrieve thus giving a pulsating action to the fly, some anglers raise and lower the rod tip as they retrieve. Do whatever you feels is giving “Life” to the fly. When a fish takes it is best not to make any big strikes. Normally the fish will leave its Lie, turn on the fly and return to its lie. While the fish is turning and heading back down, all that is necessary is for the angler to tighten into the fish. In a lot of cases the fish is hooked before the angler realises anything is happening at all.  On other occasions the fish may come for the fly several times before been hooked. If this does happen to you, try different sizes of flies or try resting the fish for a little while. I’ve often turned a fish early in the day and went back later in the evening and caught it. Remember when playing a fish that it will most likely be lightly hooked, you are using fine line and there is a bubble and another fly trailing about after the fish as it runs, try to move the fish away from areas with rocks and bushes if possible. To avoid loosing fish change the Leader regularly as it can become weak at the knots or kinked where the droppers twist around the main line. I’m sure there’s lots I’ve missed and I’m also very sure there’s many out there who could add lots to this. We have come a long way from the 18lb maxima though and the Bubble and fly is “simple”.